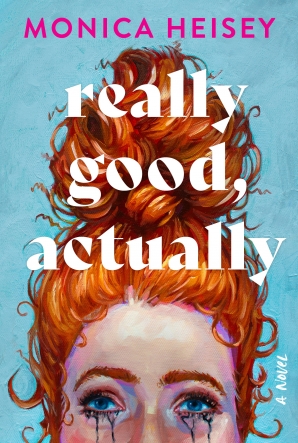 A hilarious and painfully relatable debut novel about one woman's messy search for joy and meaning in the wake of an unexpected breakup, from comedian, essayist, and award-winning screenwriter Monica Heisey

Maggie is fine. She's doing really good, actually. Sure, she's broke, her graduate thesis on something obscure is going nowhere, and her marriage only lasted 608 days, but at the ripe old age of twenty-nine, Maggie is determined to embrace her new life as a Surprisingly Young Divorcée™.

Now she has time to take up nine hobbies, eat hamburgers at 4 am, and “get back out there" sex-wise. With the support of her tough-loving academic advisor, Merris; her newly divorced friend, Amy; and her group chat (naturally), Maggie barrels through her first year of single life, intermittently dating, occasionally waking up on the floor and asking herself tough questions along the way.

Laugh-out-loud funny and filled with sharp observations, Really Good, Actually is a tender and bittersweet comedy that lays bare the uncertainties of modern love, friendship, and our search for that thing we like to call “happiness". This is a remarkable debut from an unforgettable new voice in fiction.

“Every sentence of Monica Heisey’s writing is a treat. Her observations on men, women, friendship, family, love, sexuality and womanhood are equal parts hilarious and profound. No one makes me laugh like she does.” — Dolly Alderton, bestselling author of Ghosts

"Monica Heisey is a very funny writer, which would be enough for me to recommend this book. But you have to remember: humor isn't a supplement to realism; it's a necessary component of it. Really Good, Actually may start out like a light-hearted not-so-romantic comedy, but it quickly transforms into something more tense and existential, a realistically absurd portrait of a woman who has no idea who she is or what is going on. And yeah, it's really funny."  — Lauren Oyler, bestselling author of Fake Accounts

"Really Good, Actually is a goddamn delight. Heisey doesn't shy away from any of the hard stuff, showcasing the myriad ways people turn into little monsters when their hearts get broken and lose sight of themselves. This novel is wildly funny and compulsively readable, the kind of book you immediately share with your best friend. I adored it." — Kristen Arnett, New York Times bestselling author of Mostly Dead Things

"The kind of book you miss when you finish but that also leaves you feeling so deliciously content and satisfied. Heisey’s pen is by turns relentlessly sharp, incisively funny, sneakily disarming and heartbreakingly tender. This is a wonderful story about love, loss, friendship, rediscovering yourself and the hope that after coming messily apart it is possible to come back together fuller again. Maggie felt like a chaotic friend I adore and Heisey tells her story beautifully." — Bolu Babalola, bestselling author of Honey & Spice

“One of the most hilarious and barbed accounts of unexpectedly starting over I’ve ever read. Monica Heisey isn’t just interested in the romantic side of divorce, but in how our identities collapse and the freefall that accompanies it. If you’ve ever felt lost and hoped that it was leading towards wisdom, Really Good, Actually is your novel.” — Stephanie Danler, New York Times bestselling author of Sweetbitter

“From the moment I picked up this book, I haven’t stopped talking about it. Really Good, Actually is a hilarious look at divorce, friendship, identity, and the many ways we try and fail to take care of each other. Monica Heisey has given us a modern-day Heartburn, a brilliant, unique, charming novel that I will be recommending to every single person I know.” — Jennifer Close, bestselling author of Girls in White Dresses

"If Bridget Jones had a long-lost Canadian niece, it would be Monica Heisey's utterly lovable hot-mess of a young divorcee, Maggie. Her voice is so fresh and funny and true, it feels like you've never heard it before, yet so familiar that you will follow it anywhere. Really Good, Actually will also totally make you want to marry each and every one of its comic digressions (the mid-heartbreak Google Searches; the Unanswered Texts, the Tinder Correspondences) because they are so perfect and brilliant and because really, what's better than the deep black humor of heartbreak?" — Laura Zigman, bestselling author of Separation Anxiety

"Impossibly funny, endearingly felt, alive and rich and ultimately a story of trying not only to find one's self but to figure out how best to care for the people we love. I woke up both my husband and my dog laugh-crying while reading this book." —  Lynn Steger Strong, author of Flight

"Monica Heisey will make you laugh. . . . Really Good, Actually laughs at heartbreak, delicately, tenderly, and with an emphasis on heart." — Globe and Mail (Toronto)

"Funny, charming debut . . . Really Good, Actually is like having a front-row seat inside Maggie’s hyperenergetic brain as she searches for the magic combination of distractions to heal the pain. . . . Heisey knows how to bring laughs grounded in frank observations of the behaviours we try our best to hide from others." — Toronto Star

"A tender yet sharp debut, detailing the self-discovery and absurdity in heartbreak." — The Canadian Press

"A bittersweet, satirical take on a "young" divorcee. . . . The results are bleak but often very funny." — Maclean's

"It's incredibly funny, but it's also very honest about selfishness, and about being the heartbroken one in a group of friends. I loved it — it made me laugh a million times. It is really warm and I related an awful lot. Anyone who has ever been young and selfish — which is all of us — can definitely identify!” — CBC Books

"Monica Heisey’s debut novel is one of the most anticipated releases of the season. It’s described as a “hilarious and painfully relatable” story, and with the author’s background as a comedian, it’s a safe bet that it’s going to live up to the promise and make you laugh." — In Magazine

“Novels about women who unravel somewhere around the age of 30 aren’t exactly rare, but this one stands out both because it’s laugh-out-loud funny and because of the artful way Heisey reveals that her heroine is most definitely not OK. Maggie’s tales of dating-app life and trying out new hobbies with another young divorcée are recounted with ironic humor, but the cracks in her carefree persona expose a deep despair....Her ultimate breakdown is inevitable, and she has to work hard to win back the trust of the people who love her most—and regain trust in herself. Smart, bighearted, and hilarious.” — Kirkus Reviews

"Heisey’s portrayal of the joys and pitfalls of online dating will ring true, and Maggie’s self-deprecating, often snarky humor keeps the deeper themes of the story from getting too heavy. It’s a thoroughly modern take on 1990s chick lit, exaggeratedly over the top in the best possible way. Readers will cheer messy Maggie on as she stumbles inelegantly toward a happy, postdivorce life." — Booklist

“Heisey perfectly captures the realities of a big, bad breakup, and it couldn’t be more refreshing. Add that to the downright loveable cast and you’ve got the perfect anti-rom com.” — Bust Magazine

A young divorcée stumbles through modern dating, adult friendship, mental health issues and self-discovery in this darkly funny novel about spinning out before starting over. . . . Moments of genuine pain, joy or self-interrogation combine with dark humor to make a novel that manages to remain engaging even as Maggie slides to an inevitable rock bottom. . . . Really Good, Actually is a coming-of-age novel for adults trying to connect in the age of apps. Fans of My Year of Rest and Relaxation, Queenie or shows like HBO's Girls will want to give it a read." — Shelf Awareness

"Comedian and TV writer Heisey delivers an appealing debut novel (after the essay collection I Can’t Believe It’s Not Better) about a 28-year-old stalled PhD candidate left adrift after her divorce . . . Even in its darkest moments the book is very funny, and Heisey’s inspired skewering of urban millennial life hits the mark. Readers will gobble up this Bridget Jones’s Diary for the smartphone era.” — Publishers Weekly

"There’s humor and grace in Really Good, Actually—a lightness of touch, a wry wit. Maggie is a woman disembarking from traditional romance to find herself. And while her marriage might have been short, her voice is enduring, and her journey is engaging, surprising, and fresh.” — Bookpage

“A tender yet sharp novel that tells the heartbreaking and hilarious tales of a young woman going through a divorce.” — Entertainment Weekly

“A cringe-filled, funny—and surprisingly poignant—look at one woman’s self-discovery after heartbreak.” — People

"Comedian, essayist, and screenwriter Monica Heisey makes her novel-length debut with the tragicomic story of Maggie, the Surprisingly Young Divorcée. Her marriage lasted only 608 days, and her graduate work is a slow-motion trainwreck, but Maggie is, you know, fine. Really good, actually. Word on Industry Street is that this book is very funny, indeed." — Goodreads, Readers' Most Anticipated Books of 2023

“A prime example of how a storyteller's voice can pull you right in and keep you clinging to every sentence. . . .This is a book I would/will give to my closest girlfriends and say, ‘You have to read this.’” — Zibby Owens, GoodMorningAmerica.com

"Prepare for a charmingly messy and relatable reflection of modern love and the elusive search for happiness in Heisey's heartfelt and hilarious debut novel.” — E! News

“Readers will surely relate to Maggie as she navigates these choppy new waters…Really Good, Actually is a balm that will soothe the soul.” — Shondaland, The Best Books for January 2023

“Very funny—think Bridget Jones meets ‘Broad City’. . . . Heisey is making a career out of guiding characters through the kinds of crises we can laugh at and sympathize with all at once, while upending enough rom-com tropes to keep things interesting.” — Los Angeles Times

"Heisey’s adroit control of her narrative and wickedly funny turns of phrase mean Maggie can become monstrous as she flails from one disastrous choice to the next, but remains heartbreakingly relatable . . . It’s an intoxicating mix of needle-sharp observation and soggy mess of emotion, and heralds a really good author to watch." — The Times (UK)

"A smart and funny coming-of-divorce novel, a story of self-reckoning with a likable heroine to root for . . . full of millennial witticisms and reliably regular deadpan turns." — The Guardian

"Believe the hype . . . At once self-mocking and serious, Heisey’s whip-smart tale of Millennial disillusionment and dawning self-knowledge sends up ‘personal growth’ cliches while exploring friendship, sexuality, body image and online performativity . . . A meticulous portrayal of self-destructive behaviour that is both painfully accurate and mordantly funny . . . For fans of Sheila Heti and Sloane Crosley." — Bookseller

Monica Heisey is an author and television writer from Toronto, now based in London, UK. Her writing has been published in <i>The New Yorker</i>, the <i>New York Times</i>, <i>The Cut</i>, <i>Vogue</i>, the <i>Guardian</i>, <i>VICE</i>, and elsewhere. She was previously an Editor at Large at Broadly. Her first book, an acerbic collection of essays called <i>I Can’t Believe It’s Not Better</i>, was published in Canada by indie Red Deer Press. She has written on shows including <i>Schitt’s Creek</i>, <i>Workin’ Moms</i>, <i>Baroness von Sketch Show</i> and <i>Gary and his Demons</i>.

Other Works by Monica Heisey