How I Survived Six Concentration Camps and Became a Nazi Hunter 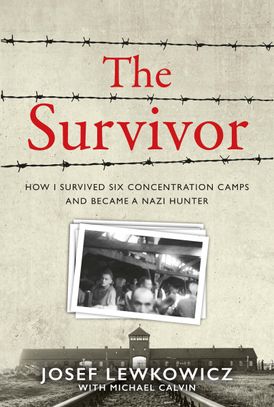 How I Survived Six Concentration Camps and Became a Nazi Hunter

An amazing, untold story of the Holocaust, of survivor turned Nazi hunter

In the tradition of The Boy in the Woods and By Chance Alone, The Survivor is an unbelievable yet true story of one man’s endurance and his determination to not only survive the Holocaust but to bring to justice those who perpetrated great crimes against humanity.

This is one of the last great untold stories of the Holocaust. Josef Lewkowicz was the only one left alive in his extended family of 150. The survivor of six concentration camps, he became a Nazi hunter, responsible for bringing to justice his greatest tormentor, the Butcher of Plaszow, as well as the murderous SS camp Kommandant Amon Goeth. Working as part of a covert operation, he also helped to rescue hundreds of orphaned children who had been hidden by doomed parents during the ghetto clearances in Poland. Many of these children were able to begin new lives in Israel.

Lewkowicz operated as a diamond dealer in South America, befriended leading Israeli politicians like Prime Minister Menachem Begin, and met Argentine dictator Juan Peron. He raised his family in Montreal. He is now ninety-six years old and lives in Jerusalem. This book, his testimony, captures the spirit, the soul, the neshama of the survivor.

"A truly harrowing account, humanely told in fast-paced, affecting prose. You won’t be able to put it down — even in those moments where the truth feels too hard to read." — Sophy Roberts, author of The Lost Pianos of Siberia

JOSEF LEWKOWICZ is a Holocaust survivor turned Nazi hunter. He helped to rescue hundreds of orphaned children and hunted down one of the most notorious war criminals, Amon Goeth, who was portrayed by Ralph Fiennes in Schindler’s List. Josef Lewkowicz lives in Jerusalem.

MICHAEL CALVIN has worked in more than eighty countries and is one of the UK’s most accomplished writers. He lives in London, England.

Other Works by Michael Calvin