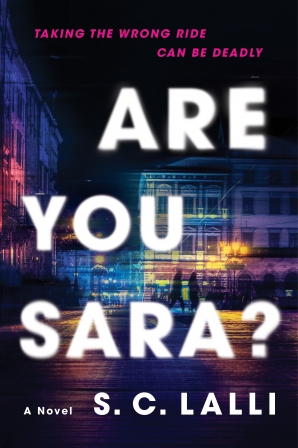 Two women, each named Sara, get into separate rideshares . . . but only one makes it home alive. Which Sara was the real target?

Despite a scholarship, law student Saraswati “Sara" Bhaduri holds down two jobs in order to make her way through school, but it's still a struggle. She's had to do things to pay the bills that most people wouldn't expect “a nice Indian girl" to do. Sara is working at the campus bar one seemingly ordinary Tuesday night when her boss demands that she deal with a drunk girl in the bathroom.

The two women become fast friends. Why? Because they have the same name. And despite their different circumstances, they connect. At the end of the evening, each orders a rideshare home. They tumble into the back of their respective cars and head out into the night.

But sometime later, Sara wakes up in the car to find she's on the wrong side of town—the rich side—and realizes that she and Sarah Ellis took the wrong cars home. With no money, Sara walks back to her apartment on the shady side of town only to see police lights flashing, illuminating a body crumpled on her doorstep: Sarah. But was the target Sarah Ellis or Sara Bhaduri? And why would anyone want either of them dead?

In this smart, twisty novel about wealth, ambition and dangerous longing, the layers are peeled back on two young women desperate to break away from the expectations placed on them, leading to devastating results.

"A gripping, immersive read, S.C Lalli has written a tightly woven thriller featuring my new favourite complicated female protagonist. Sara – Saraswati Bhaduri - is riveting as a struggling, savvy law student who becomes embroiled in a gritty murder mystery, while also tackling issues of race, class and identity at her Ivy-league college. I couldn’t put this book down, and neither will you!" — Uzma Jalaluddin, bestselling author of Hana Khan Carries On

"Dynamic women with complicated lives take center stage in this twisty mystery about a rideshare mix-up which results in murder. Lalli is a fresh voice in the thriller genre and a writer to watch!" — Wendy Walker, internationally bestselling author of Don't Look For Me

"Are You Sara? is a crackling spit-fire of suspense. I read it in two sittings! And that delicious little twist at the very end is a brilliant depiction of just how cunning women can be." — Wanda M. Morris, acclaimed author of All Her Little Secrets

“Romance author Lalli (A Holly Jolly Diwali as Sonya Lalli) ventures into thriller territory with exhilarating results….The twisty plot upsets conventional expectations while shining a light on casual sexism and racism. Readers will hope to see a lot more in this line from the versatile Lalli.” — Publishers Weekly (starred review)

Other Works by S.C. Lalli