The Theory of Crows

by David A. Robertson 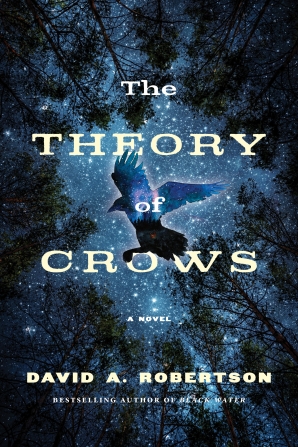 The Theory of Crows

by David A. Robertson

When a troubled father and his estranged teenage daughter head out onto the land in search of the family trapline, they find their way back to themselves, and to each other

Deep in the night, Matthew paces the house, unable to rest. Though his sixteen-year-old daughter, Holly, lies sleeping on the other side of the bedroom door, she is light years away from him. How can he bridge the gap between them when he can't shake the emptiness he feels inside? Holly knows her father is drifting further from her; what she doesn't understand is why. Could it be her fault that he seems intent on throwing everything away, including their relationship?

Following a devastating tragedy, Matthew and Holly head out onto the land in search of a long-lost cabin on the family trapline, miles from the Cree community they once called home. But each of them is searching for something more than a place. Matthew hopes to reconnect with the father he has just lost; Holly goes with him because she knows the father she is afraid of losing won't be able to walk away.

When things go wrong during the journey, they find they have only each other to turn to for support. What happens to father and daughter on the land will test them, and eventually heal them, in ways they never thought possible.

“Robertson shines in A Theory of Crows, a multilayered story of love, loss, healing and ultimately belonging. A family on the brink of shattering finds its way through ancient teachings of infinite connection and the roots of truth in the earth’s living memory.” — Michelle Good, author of Five Little Indians, winner of CBC Canada Reads

“In weaving together themes of identity, belonging, grief and land, The Theory of Crows is a novel that approaches rapture.” — Yann Martel, author of The High Mountains of Portugal and Life of Pi

“A brilliantly empathetic story that is both gentle and fierce.”  — Thea Lim, author of An Ocean of Minutes

DAVID A. ROBERTSON, a writer and freelance journalist, is the recipient of the Writers’ Union of Canada Freedom to Read Award. His memoir, Black Water, won the Carol Shields Winnipeg Book Award and the Alexander Kennedy Isbister Award for Non-Fiction. His middle-grade fantasy series, the Misewa Saga, includes the #1 national bestseller The Barren Grounds. He won the Governor General’s Literary Award for the illustrated books On the Trapline and When We Were Alone. Robertson is also the writer and host of the award-winning podcast Kiwew. The Theory of Crows is his first novel for adults. David A. Robertson is a member of Norway House Cree Nation. He lives in Winnipeg.

Other Works by David A. Robertson