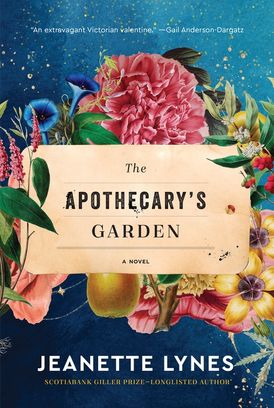 Indigo's Most Anticipated Books of 2022

Victorian Canada: Touring circuses, seances, and a world powered by steam engines. But in Belleville, Ontario, a twenty-eight-year old spinster, Lavender Fitch, barely scrapes by, selling flowers from her garden at the train station, her position in life greatly diminished after the death of her father, the local apothecary.

Then, one day, a glamorous couple step off the train. The lady is a famed spirit medium, Allegra Trout, who has arrived for a public show of her mediumship, accompanied by her handsome but disfigured assistant, Robert. With her striking beauty and otherworldly charms, Allegra casts a spell over Belleville from the moment she arrives.

Lavender is captivated by the medium as well. She’s been searching for a secret cache of money and hopes Allegra might be able to contact her dead mother for clues to its hidden location.

As the Trouts remain in town, preparing for their Mystical Extravaganza, Robert and Lavender grow close, much to Allegra’s disapproval. Will Robert and Lavender's relationship blossom or will it be abandoned when he leaves for the next town? Will Lavender find her mother's gift or be forced from her home and beloved garden?

The Apothecary’s Garden is a magical story about the mysteries of life, the enchantment of flowers, and wonders of love

“An open-hearted story, full of light, flowers, and love, The Apothecary’s Garden is vintage sweetness.”  — Jacqueline Baker, author of The Broken Hours

“From the first magical page, the reader is swept into the romance of another era. This is a classic and charming tale of a poverty-stricken maiden, a ghost and a medium, of family secrets and hidden treasure, and how true love perseveres.” — Gail Anderson-Dargatz, author of The Almost Wife

"Magical....a delight....In the Apothecary's Garden, Jeanette Lynes has crafted a wonderfully lyric story where the words flow like music. It is poetry for the mind and the heart - a tonic for souls bruised by the difficulties of our present day." — Blog Critics

“I predict from the quality of its prose, its rich characterizations, and the authenticity of the historical setting that The Apothecary’s Garden will win awards.”  — Cloud Lake Literary

JEANETTE LYNES grew up in rural southern Ontario. She is the author of seven collections of poetry and two novels. Her first, The Factory Voice (2009), was longlisted for the Scotiabank Giller Prize. Her second, The Small Things That End the World (2018), won the Saskatchewan Book Award for fiction. The director of the MFA in writing program at the University of Saskatchewan, Jeanette Lynes splits her time between Toronto and Saskatoon.

Other Works by Jeanette Lynes