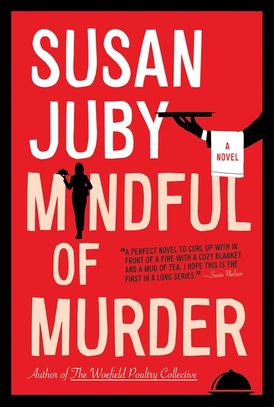 Meet Helen Thorpe. She’s smart, preternaturally calm, deeply insightful and a freshly trained butler. On the day she is supposed to start her career as an unusually equanimous domestic professional serving one of the wealthiest families in the world, she is called back to a spiritual retreat where she used to work, the Yatra Institute, on one of British Columbia’s gulf islands. The owner of the lodge, Helen’s former employer Edna, has died while on a three-month silent self-retreat, leaving Helen instructions to settle her affairs.

But Edna’s will is more detailed than most, and getting things in order means Helen must run the retreat for a select group to determine which of Edna’s relatives will inherit the institute. Helen’s classmates, newly minted butlers themselves, decide they can’t let her go it alone and arrive to help Helen pull things off. After all, is there anything three butlers can’t handle? As Helen carries out the will’s instructions, she begins to think that someone had reason to want Edna dead. A reluctantly suspicious investigator, Helen and her band of butlers find themselves caught up in the mystery.

“No one but Susan Juby would come up with the concept of a Buddhist butler detective, then execute it so beautifully. This novel has all the whimsical characters and charm we’ve come to know and love from Juby, but this time wrapped in a murder/mystery. I want to say it's reminiscent of #1 Ladies’ Detective Agency or The Thursday Murder Club, yet it is so entirely unique; a perfect novel to curl up with in front of a fire with a cozy blanket and a mug of tea. I hope this is the first in a long series."
— Susin Nielsen, Bestselling author and creator of Family Law on Global TV

”Take one newly graduated domestic professional, a holistic retreat on an isolated island, a murdered mentor and a group of fractious suspects and you have the makings of this comedic mystery from the lauded author of the hilarious Republic of Dirt.”  — Canadian Living

SUSAN JUBY is the author of the critically acclaimed novels Getting the Girl, Another Kind of Cowboy and The Woefield Poultry Collective, as well as the bestselling Alice series (Alice, I Think; Miss Smithers; and Alice MacLeod, Realist at Last). Her most recent book for adults, Republic of Dirt, won the Leacock Medal for Humour. After dropping out of fashion college and getting a BA from the University of British Columbia, Susan went to work in the book industry and obtained a master’s degree in publishing. She currently lives on Vancouver Island with her husband, James, and their dog, who prefers to remain anonymous.

Other Works by Susan Juby