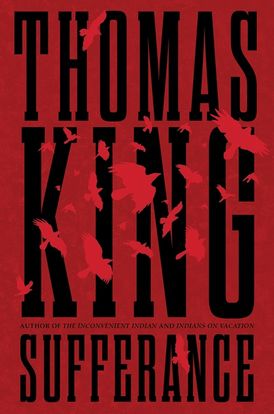 Jeremiah Camp, a.k.a. the Forecaster, can look into the heart of humanity and see the patterns that create opportunities and profits for the rich and powerful. Problem is, Camp has looked one too many times, has seen what he hadn’t expected to see and has come away from the abyss with no hope for himself or for the future.

So Jeremiah does what any intelligent, sensitive person would do. He runs away. Goes into hiding in a small town, at an old residential school on an even smaller Indian reserve with no phone, no Internet, no television. With the windows shut, the door locked, the mailbox removed to discourage any connection with the world, he feels safe at last. Except nobody told the locals that they should leave Jeremiah alone.

And then his past comes calling. Ash Locken, head of the Locken Group, the multinational consortium that Jeremiah has fled, arrives on his doorstep with a simple proposition. She wants our hero to formulate one more forecast, and she’s not about to take no for an answer. Before he left the Locken empire, Jeremiah had put together a list of twelve names, every one a billionaire. The problem is the people on the list are dying at an alarming and unnatural rate. And Ash Locken wants to know why.

A sly and satirical look at the fractures in modern existence, Sufferance is a bold and provocative novel about the social and political consequences of the inequality created by privilege and power—and what we might do about it.

"[D]azzling . . . Sufferance is a powerful reading experience, a combination of genres and narrative approaches so deftly blended the reader is forced off-balance at almost every turn. There are elements of a skilfully handled thriller, and a low-key, almost bucolic community narrative. It is a thoroughly political novel . . . which grows increasingly tense by turns, but with a sly wit and humour throughout. It is a novel of frustration and despair, leavened with an odd, and ultimately redeeming, sense of hope. How King manages not just to juggle all of these elements, but to resolve them in ways that are both entirely unexpected and completely satisfying, is a reminder of why he is one of Canada’s foremost writers. Sufferance is a novel entirely of its time — our time — with the timeless air of greatness.” — Toronto Star

“King is a master of so many genres. This novel fits right in with these fraught times that have shone a light on financial, racial and social inequality.”  — Globe and Mail (Toronto)

“This rambling, satirical gem of a story is told by a curious narrator. . . . Small wonder King has talked about the many false steps he made over years in trying to get Sufferance into shape, the thoughts he has also expressed about his non-fiction work, The Inconvenient Indian—the two books that are arguably his finest." — Chatelaine

“The thought-provoking, intelligent and funny novel looks at privilege and power and the inequality it creates. . . . King’s portrayal of local government is an accurate one and the setting he creates allows the reader a glimpse into a part of our history that has caused unimaginable suffering. Sufferance is another excellent novel by Thomas King.” — Metroland Media

“This new satire from influential Indigenous writer King makes pointed social commentary (on issues ranging from reconciliation to living conditions on reserves) ridiculously entertaining. . . . The breezy but thought-provoking plot that ensues is as over the top as it is entirely plausible.”  — Zoomer Magazine

One Good Story, That One

Tidings Of Comfort And Joy

The Dog I Wish I Had, I Would Call It Helen

The Baby In The Airmail Box