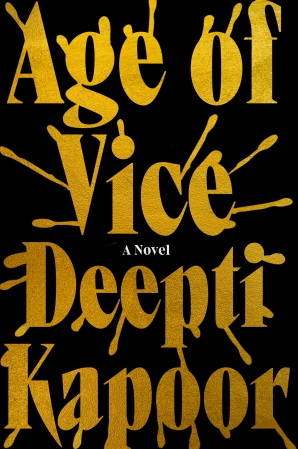 This is the age of vice, where money, pleasure, and power are everything, and the family ties that bind can also kill.

New Delhi, 3 a.m. A speeding Mercedes jumps the curb and in the blink of an eye, five people are dead. It's a rich man's car, but when the dust settles there is no rich man at all, just a shell-shocked servant who cannot explain the strange series of events that led to this crime. Nor can he foresee the dark drama that is about to unfold.

Deftly shifting through time and perspective in contemporary India, Age of Vice is an epic, action-packed story propelled by the seductive wealth, startling corruption, and bloodthirsty violence of the Wadia family -- loved by some, loathed by others, feared by all.

In the shadow of lavish estates, extravagant parties, predatory business deals and calculated political influence, three lives become dangerously intertwined: Ajay is the watchful servant, born into poverty, who rises through the family's ranks. Sunny is the playboy heir who dreams of outshining his father, whatever the cost. And Neda is the curious journalist caught between morality and desire. Against a sweeping plot fueled by loss, pleasure, greed, yearning, violence and revenge, will these characters' connections become a path to escape, or a trigger of further destruction?

Equal parts crime thriller and family saga, transporting readers from the dusty villages of Uttar Pradesh to the urban energy of New Delhi, Age of Vice is an intoxicating novel of gangsters and lovers, false friendships, forbidden romance, and the consequences of corruption. It is binge-worthy entertainment at its literary best.

“This is a masterpiece. Age of Vice is epic but intimate, its glittering, sharp scenes building into an astonishing geometry. It is an unforgettable story of corruption and excess, of ruthless power and the will to fight back.” — Flynn Berry, New York Times bestselling author of Northern Spy

"Sensationally good--huge, epic, immersive and absorbing...certain to be a book of the year." — Lee Child

“In Kapoor’s searing portrait of India at the turn of the 21st century (after Bad Character), finely wrought characters go to great lengths to escape the bonds into which they were born…..Kapoor’s violent and bitter story is deeply addictive; this spellbinder would be easy to devour in one big gulp, but it’s worth savoring for Neda’s uncompromising take on what she terms India’s 'losing age, the age of vice.' The author possesses a talent great enough to match the massive scope of her subject.” — Publishers Weekly (starred review)

“Kapoor spins a dizzying ride. Weaving the backstories of Ajay, Neha, and Sunny together, Kapoor's frenetic and colorful novel highlights the new global pecking order… But as this gripping tale shows, even the weakest deserve one last gasp of dignity.”  — Booklist (starred review)

“It doesn’t take long for the reader to become invested in the Mario Puzo–esque drama of the Wadia family and their associates. [Kapoor’s] dialogue shines…it’s certainly gripping. Fans of crime novels will find much to admire in this quite entertaining book…A whole lot of fun.” — Kirkus Reviews

DEEPTI KAPOOR grew up in Northern India and worked for several years as a journalist in New Delhi. The author of the novel Bad Character, she lives in Portugal with her husband.

Other Works by Deepti Kapoor