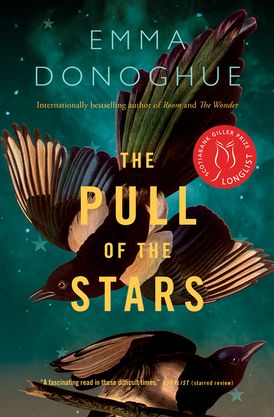 Dublin, 1918: three days in a maternity ward at the height of the Great Flu. A small world of work, risk, death and unlooked-for love, by the bestselling author of The Wonder and ROOM.

In an Ireland doubly ravaged by war and disease, Nurse Julia Power works at an understaffed hospital in the city center, where expectant mothers who have come down with the terrible new Flu are quarantined together. Into Julia’s regimented world step two outsiders—Doctor Kathleen Lynn, on the run from the police, and a young volunteer helper, Bridie Sweeney.

In the darkness and intensity of this tiny ward, over three days, these women change each other’s lives in unexpected ways. They lose patients to this baffling pandemic, but they also shepherd new life into a fearful world. With tireless tenderness and humanity, carers and mothers alike somehow do their impossible work.

In The Pull of the Stars, Emma Donoghue once again finds the light in the darkness in this new classic of hope and survival against all odds.

"Donoghue. . . . offers vivid characters and a gripping portrait of a world beset by a pandemic and political uncertainty. A fascinating read in these difficult times." - Booklist (starred review)

“Searing… Donoghue’s evocation of the 1918 flu, and the valor it demands of health-care workers, will stay with readers.”    - Publishers Weekly

“Donoghue, a first-rate historical novelist, skillfully weaves the era’s primitive medical understanding and social prejudices into her moving story of three caregivers with little but loving care to give.” - Maclean's

“A timely commentary not only on life and death, but also on the workings of fate. . . . As always, Donoghue catches the reader’s attention. Her look at both unforeseen plague and the dangerous rituals of childbirth is riveting and moving. In her disturbing but thought-provoking tale, hope and empathy appear in unexpected ways as patients and nurses alter each other’s lives.” - London Free Press

"The Pull of the Stars draws you into a world that is at once expansive and ever so small. Donoghue’s deft ability to climb up and down the ladder of abstraction allows her to reach great heights and heartbreaking lows. It offers the reader a universe to explore, shooting stars and all." - Zoomer Magazine

Born in Dublin in 1969, EMMA DONOGHUE is an Irish emigrant twice over: she spent eight years in Cambridge, England, before moving to Canada’s London, Ontario. She is best known for her novels, which range from the historical (The Wonder, Slammerkin, Life Mask, The Sealed Letter) to the contemporary (Akin, Stir-Fry, Hood, Landing). Her international bestseller Room was a New York Times Best Book of 2010 and was a finalist for the Man Booker, Commonwealth, and Orange Prizes; her screen adaptation, directed by Lenny Abrahamson, was nominated for four Academy Awards.