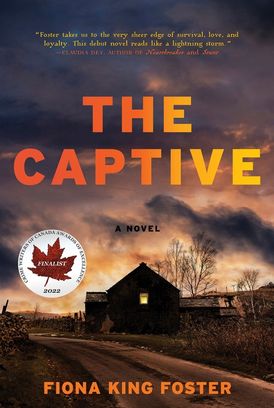 In this page-turning rural noir, a woman is forced to confront her own past during a pulse-pounding expedition to deliver a fugitive

In a secessionist rural state that has cut itself off completely from urban centres, where living is hardscrabble and poor but “free,” Brooke Holland runs a farm with her husband and two daughters. Their existence at the fringes of modern society is tenuous—they make barely enough from each harvest to keep going—yet Brooke cherishes the loving, peaceful life they have carved out for themselves. She has even begun to believe she is free from the violent history she has kept a secret from her family.

When escaped criminal Stephen Cawley attacks the farm, Brooke’s buried talents surface, and she manages to quickly and harshly subdue him. Convinced that he has come in retribution for the blood feud that began years ago, Brooke sets out to bring Cawley to justice, planning to use the bounty on his head to lead her family into hiding far from danger. Fearing that other members of Cawley’s infamous family will soon descend on the farm, Brooke insists that Milo and the girls flee with her, travelling miles on foot across an unforgiving landscape to reach the nearest marshal. Their journey, beginning at the onset of winter with little preparation, brings already strained family dynamics to the breaking point. As Brooke’s ghosts—both real and imagined—close in, the ruthlessness that allowed her to survive her past may become the biggest threat to her hopes for a different future. What follows is a harrowing exploration of family loyalty, trauma and resilience.

As haunting and propulsive as it is powerfully written, The Captive is a thrilling debut novel about the seemingly impossible choices we make to survive and protect the ones we love.

"The Captive is a wonder, a wild horse in the sure and steady hands of the brilliant Fiona King Foster. Electrifying and otherworldly, The Captive gives us a new feminist heroine, an Offred traversing Cormac McCarthy’s hazardous dreamscapes. Through the ingenious and fierce-hearted Brooke Holland, Foster takes us to the very sheer edge of survival, love and loyalty. This debut novel reads like a lightning storm, and then it stays with you, leaving a profound impression––ghostly, gorgeous and moving."  — Claudia Dey, author of Heartbreaker and Stunt

"Rarely does a first novel feel so fully, expertly realized as Fiona King Foster's The Captive. There's everything here you'd want from a book: compelling characters, suspenseful storytelling, crystalline language, and a portrait of a near-future that, though troubled, pulses with a human heartbeat of love, and honour, and hope." — Pasha Malla, author of Kill the Mall and  Fugue States

“In this riveting debut, Foster vividly brings to life a gritty, hardscrabble and all too plausible near-future and a resolute heroine who defends those she loves throughout a harrowing ordeal. The Captive is a propulsive, word-perfect thriller about the ghosts that haunt us and the strengths that lie within.”  — Saleema Nawaz, author of Songs for the End of the World

“Fiona King Foster has written a tension-wire novel, suspenseful from the first line to the last. A story about a fractured country quickly transforms into a study of the ways in which the darkest parts of our history follow us around like shadows.”  — Omar El Akkad, author of American War

FIONA KING FOSTER was raised in Brudenell, Ontario, a rural community now misleadingly referred to as a “ghost town.” Her writing has appeared in the Globe and Mail, Hobart, Maisonneuve, Midway Journal, the New Quarterly, New World Writing, NOON, New York Tyrant, le Panoptique and Room. She lives in Toronto and works with the national literacy organization Frontier College. The Captive is her first novel.

Other Works by Fiona King Foster