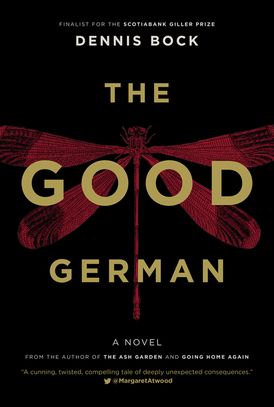 In November 1939, a German anti-fascist named Georg Elser came as close to assassinating Adolf Hitler as anyone ever had. In this gripping novel of alternate history, he doesn’t just come close—he succeeds. But he could never have imagined the terrible consequences that would follow from this act of heroism.

Hermann Göring, masterful political strategist, assumes the Chancellery and quickly signs a non-aggression treaty with the isolationist president Joseph Kennedy that will keep America out of the war that is about to engulf Europe. Göring rushes the German scientific community into developing the atomic bomb, and in August 1944, this devastating new weapon is tested on the English capital.

London lies in ruins. The war is over, fascism prevails in Europe, and Canada, the Commonwealth holdout in the Americas, suffers on as a client state of the Soviet Union. Georg Elser, blinded in the A-bombing of London, is shipped to Canada and quarantined in a hospice near Toronto called Mercy House. Here we meet William Teufel, a German-Canadian boy who in the summer of 1960 devises a plan that he hopes will distance himself from his German heritage and, unwittingly, brings him face to face with the man whose astonishing act of heroism twenty-one years earlier set the world on its terrifying new path.

In this page-turning narrative, Bock has created an utterly compelling and original novel of historical speculation in the vein of Philip Roth’s The Plot Against America, John Wyndham’s The Chrysalids and Philip K. Dick’s cult classic The Man in the High Castle.

"A gripping and rather terrifying read."  — Toronto Star

"Absorbing and disturbing, intimate and sad, Dennis Bock's The Good German imagines an alternate history of World War Two that is no less savage for not being true. In young William Teufel, Bock gives us a character of melancholy complexity, a boy caught between loyalties, whose world is being unmade even as he struggles to find his place within it. This is a startling novel.” — Steven Price, Giller Prize finalist for Lampedusa

"In his new novel, Dennis Bock depicts the chillingly plausible butterfly effect of a simple twist in history. The Good German is a compelling and thought-provoking story that's remarkably relevant for our times."   — Ellen Keith, bestselling author of The Dutch Wife

“An astonishing concept that speaks directly to our current affairs.” — Leon Rooke, author of House on Major Street

DENNIS BOCK’s book of stories, Olympia, won the CAA Jubilee Award, the Danuta Gleed Literary Award and the Betty Trask Award. His novels include The Communist’s Daughter and The Ash Garden, a #1 bestseller, a winner of the Canada-Japan Literary Award and a finalist for the International IMPAC Dublin Literary Award, a Commonwealth Writers’ Prize, the Kiriyama Prize and the Amazon.ca First Novel Award. His most recent novel, Going Home Again, was a finalist for the Scotiabank Giller Prize. Dennis Bock lives in Toronto.

Other Works by Dennis Bock