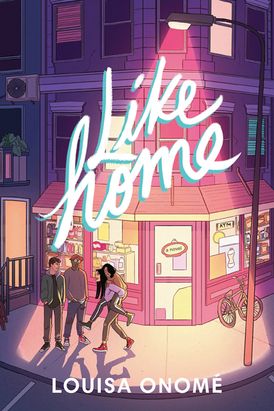 Chinelo—or Nelo, as her best friend, Kate, calls her—is all about her neighbourhood, Ginger East. She loves its chill vibe, its ride-or-die sense of community and the memories she has of growing up there. Ginger East isn’t what it used to be, though. After a deadly incident at the local arcade, most of Nelo’s friends, except for Kate, have moved away. But as long as the two girls have each other, Nelo’s good.

Then Kate’s parents’ corner store is vandalized, leaving Nelo shaken to her core. The police and the media are quick to point fingers, and soon more of the outside world descends upon Ginger East with promises to “fix the neighbourhood.” Suddenly, Nelo finds herself in the middle of a drama that is unfolding on a national scale.

Worse yet, Kate has begun acting strange. She’s pushing Nelo away at the exact time they need each other most. Nelo’s entire world is morphing into something she hates, and she must figure out how to get things back on track or risk losing everything—and everyone—she loves.

“A touching coming-of-age story, highly recommended for audiences looking for titles like Angie Thomas’s The Hate U Give and Nic Stone’s Dear Martin. A must-have.”  — School Library Journal (starred review)

"Remarkable for its authenticity . . . The snapshot of youth culture feels as fresh as last second’s TikTok swipe." — Quill & Quire

“The effortless diversity of the cast is a model for fiction. Light and serious, playful and real, this is a debut not to be missed.” — Kirkus Reviews (starred review)

"Evocative and gratifyingly immersive, Like Home brings the idea of community to brilliant life. With expertly-drawn characters and a setting so alive it becomes another character we root for, Louisa Onome has written a celebration of the human capacity to find and re-find home." — S. K. Ali, New York Times-bestselling author of Saints and Misfits and Love From A to Z

"Louisa Onomé’s YA novel is for readers who can relate to the overwhelming feelings of change all around us. For Nelo, everything is changing. Her neighbourhood, her relationships and the way boys are looking at her. But Nelo’s unbeatable spirit is what will get her through turbulent times and will have readers cheering her on to the very last page."
— Catherine Hernandez, author of Scarborough and Crosshairs

“With this debut, Like Home, Louisa Onomé rightfully emerges as a writer worth watching. Chinelo is a fierce, young protagonist with an unshakeable sense of community. She’s a powerful heroine in a timely story that young people need right now — a story about an ordinary teen whose integrity and courage transform the world around her and the place she calls home. It’s a story I wish I’d read when I was in school, and I can’t wait to see what Louisa does next.”
— Jael Richardson, author of Gutter Child and The Stone Thrower

LOUISA ONOMÉ is the Nigerian Canadian author of the critically acclaimed young adult novels Like Home and Twice as Perfect. She holds a BA in professional writing from York University. When she is not writing, her hobbies include picking up languages she may never use, crying over her favourite video games and perfecting her skin-care routine. In her latest work for teens, The Melancholy of Summer, she explores identity, culture and the ever-shifting definitions of home and family. Louisa Onomé lives in the Toronto area.

Other Works by Louisa Onomé

The Melancholy of Summer