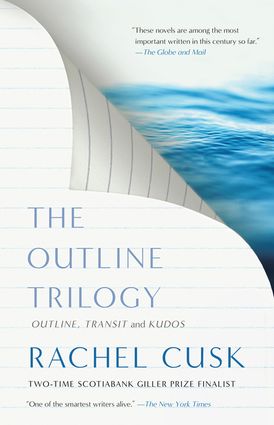 “These novels are among the most important written in this century so far.” —The Globe and Mail

Rachel Cusk’s ambitious Outline trilogy has received acclaim on both sides of the Atlantic. Outline (2015) was a finalist for both the Scotiabank Giller Prize and the Governor General’s Literary Award for Fiction. Transit (2017), has been called “dreamlike” (Toronto Star), “extraordinary” (The Daily Telegraph) and “a work of stunning beauty, deep insight and great originality” (The New York Times Book Review). And Kudos (2018) has been called “intellectually entrancing” (The Globe and Mail), “radical and beautiful” (The New Yorker) and “bracingly compelling” (Vogue).

Brought together in one exquisite collection, this groundbreaking trilogy follows Faye, a novelist facing divorce and family collapse, as she teaches creative writing in Athens, rebuilds a family in London and travels to European cities for literary events—along the way meeting people who help to reveal the merit in suffering, the fear that accompanies mysterious, inescapable change, and the hope of new possibilities that open from it. Cusk’s original and powerful writing captures brilliant and startling insights into facing a great loss and the trauma of change.