An Old Man, a Mountain, and the Search for a Hidden Past 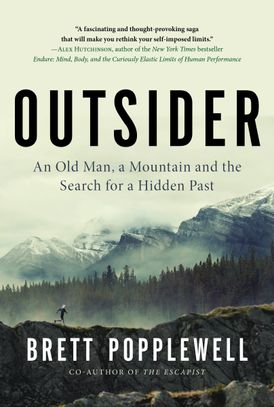 An Old Man, a Mountain, and the Search for a Hidden Past

When journalist Brett Popplewell first heard about Dag Aabye, an aging former stuntman who lived alone inside a school bus on a mountain, running day and night through blizzards and heat waves, he was intrigued and bewildered. Captivated by the seemingly implausible tale of a wild super-athlete aging more slowly than the rest of us, he was determined to meet the apocryphal white-haired man who was pushing the boundaries of the human mind and body beyond what anyone could dream was possible.

What Popplewell witnessed on a secluded mountain perch led him on a six-year odyssey to uncover the true story of the 81-year-old man.

Outsider takes readers on a remarkable journey from Nazi-occupied Norway to Argentina and British Columbia. The book chronicles how a child born under mysterious circumstances during World War II finds his way onto the big screen in Goldfinger, is heralded as the world’s first extreme skier, and is later driven into the wilderness. Both joyful and tragic, Outsider presents a bold challenge to our notions of aging, belonging and human accomplishment.

"A fascinating mystery, eloquently told." — Adam Shoalts, Ph.D., bestselling author of Beyond the Trees and The Whisper on the Night Wind

"A fascinating and thought-provoking saga that will make you rethink your self-imposed limits." — Alex Hutchinson, author of the New York Times bestseller Endure: Mind, Body, and the Curiously Elastic Limits of Human Performance

“A spellbinding and immersive portrait of a man who skirted the fringes of society as one of our great enigmas: recluse, prodigy, wildman, ultra-athlete, guru. Outsider is a riveting, deeply affecting book about the history we run from, and the limits we run to.” — Harley Rustad, author of Lost in the Valley of Death: A Story of Obsession and Danger in the Himalayas

"If you do a deep dive on the life of any average person, you’ll find a story worth telling. In Outsider, Brett Popplewell has gone subterranean on someone so extraordinary that he seems imaginary. But you couldn’t invent Dag Aabye. He’d already invented himself.” — Cathal Kelly, author of Boy Wonders: A Memoir of Childhood, Obsession and Growing Up

"In Outsider, Brett Popplewell deploys his impeccable narrative skills to produce a biography that is equal parts engrossing, heart-wrenching and inspirational. With fascinating sojourns to Nazi-occupied Norway and the dawn of extreme skiing, Outsider ultimately traces one man's path to finding a deep and abiding joy in existence amid remarkably unconventional circumstances.” — Sarah Everts, author of The Joy of Sweat

BRETT POPPLEWELL is a bestselling author and associate professor of journalism at Carleton University in Ottawa. He has written for Bloomberg Businessweek, Mother Jones, The Globe and Mail, the Toronto Star, Sportsnet, Maclean's and The Walrus, among other publications. A winner of multiple National Magazine Awards in Canada, his work has also appeared in The Best American Sports Writing and The Best Canadian Essays.