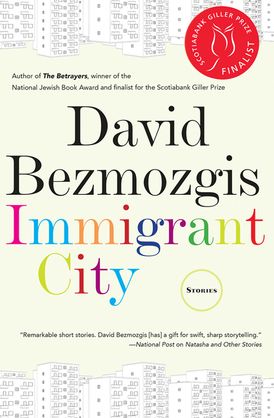 FINALIST FOR THE 2019 SCOTIABANK GILLER PRIZE

In the title story, a father and his young daughter stumble into a bizarre version of his immigrant childhood. A mysterious tech conference brings a writer to Montreal, where he discovers new designs on the past in “How It Used to Be.” A grandfather’s Yiddish letters expose a love affair and a wartime secret in “Little Rooster.” In “Childhood,” Mark’s concern about his son’s phobias evokes a shameful incident from his own adolescence. In “Roman’s Song,” Roman’s desire to help a new immigrant brings him into contact with a sordid underworld. At his father’s request, Victor returns to Riga, the city of his birth, where his loyalties are tested by the man he might have been in “A New Gravestone for an Old Grave.” And, in the noir-inspired “The Russian Riviera,” Kostya leaves Russia to pursue a boxing career only to find himself working as a doorman in a garish nightclub in the Toronto suburbs.

In these deeply felt, slyly humorous stories, Bezmozgis pleads no special causes but presents immigrant characters with all their contradictions and complexities, their earnest and divided hearts.

“[Bezmozgis] shows that his skills at creating perfect (and perfectly unsettling) worlds-within-worlds remain unparalleled. . . . Intelligent, funny, unfailingly sympathetic, Bezmozgis portrays lives constantly teetering between past and present, between worlds remembered and those that are all too real.” — Toronto Star

“David Bezmozgis deepens his exploration of the fates and furies that beset Jewish immigrants as they struggle with the unwieldy claims of the past. Replete with the wry humour and finely hewn prose that characterized the author’s debut, Natasha and Other Stories, this new collection resonates with power and poignancy.” — Quill & Quire

Praise for Natasha and Other Stories: —

“Bezmozgis’s pointed, emotionally resonant tales are so elegant they seem destined, like [Isaac] Babel’s for anthologies of classic fiction.” — The Globe and Mail

“What sets [Bezmozgis] apart . . . is his quiet command of unadorned language, his wry humour and his keen understanding of the human heart.” — Winnipeg Free Press

Praise for The Free World: —

“A delicious drama of ambivalence and excitement. . . . The vigour of the book’s characters is achieved in the remarkable way Bezmozgis puts words together.” — Maclean's

“Bezmozgis makes good on the promise of his celebrated first book, Natasha and Other Stories (2004), in his spectacular first novel. Sharply funny and fast-paced, yet splendidly saturated with intriguing psychological nuance and caustic social commentary.” — Booklist (starred review)

“Bezmozgis displays an evenhanded verisimilitude in dealing with a wide variety of cold war attitudes. . . An assured, complex social novel whose relevance will be obvious to any reader genuinely curious about recent history, the limits of love, and the unexpected burdens that attend the arrival of freedom.” — Publishers Weekly

“Bezmozgis proves why he was recently proclaimed one of The New Yorker’s 20 Under 40; this is mellifluous, utterly captivating writing, and you’ll live with the Krasnansky family as if it were your own.” — Library Journal (starred review)

Praise for The Betrayers: —

“David Bezmozgis has a dazzling talent, is the possessor of that rarest of skills—the ability to create fiction which is intensely serious but which also vividly encompasses the absurdity of life.”   — Scotiabank Giller Prize Jury

“The Betrayers is an endlessly fascinating exchange of philosophical views and a character study of great depth and nuance, made all the more effective because of its compact structure and swift pace of narrative.” — National Post

“Bezmozgis is a remarkably polished and proficient writer. . . .unquestionably one of the star writers of his generation. He not only grapples with an important modern story, he does so with undeniable authenticity and intelligence.” — Quill & Quire