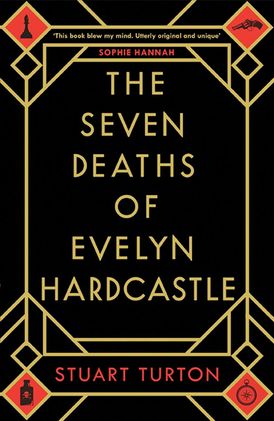 'Somebody's going to be murdered at the ball tonight. It won't appear to be a murder and so the murderer won't be caught. Rectify that injustice and I'll show you the way out.'

It is meant to be a celebration but it ends in tragedy. As fireworks explode overhead, Evelyn Hardcastle, the young and beautiful daughter of the house, is killed.

But Evelyn will not die just once. Until Aiden – one of the guests summoned to Blackheath for the party – can solve her murder, the day will repeat itself, over and over again. Every time ending with the fateful pistol shot.

The only way to break this cycle is to identify the killer. But each time the day begins again, Aiden wakes in the body of a different guest. And someone is determined to prevent him ever escaping Blackheath...

“This book blew my mind. It is utterly original and unique. I couldn’t get it out of my head for days afterwards.” — Sophie Hannah

“Dazzling . Bracingly original, fiendishly clever . Quite unlike anything I’ve ever read, and altogether triumphant. I wish I’d written it.” — A.J. Finn, author of The Woman in the Window

“The Seven Deaths of Evelyn Hardcastle is a mind-bending mash-up of Agatha Christie, Quantum Leap and Groundhog Day. If it isn’t made into a film in the very near future, I’ll eat my deerstalker.” — Sunday Express (London)

“Prepare to have your brain fried and your mind blown . . . an exhilarating, unsettling and invigoratingly original read.” — Daily Express (UK)

“I hereby declare Stuart Turton the Mad Hatter of crime. Seven Deaths is unique, energising and clever. So original, a brilliant read . I tore through it.” — Ali Land, author of Good Me, Bad Me

“Darkly comic, mind-blowingly twisty, and with a cast of fantastically odd characters, this is a locked room mystery like no other.” — Sarah Pinborough, author of Behind Her Eyes

“An original and high concept murder mystery, this is welcome rescue in a sea of psychological thrillers.” — Stylist (UK)

“This novel is so ingenious and original that it’s difficult to believe it’s Turton’s debut. The writing is completely immersive. . . .  Turton masterfully creates a natural flow while jumping through different characters on different days. . . . Stuart Turton is an author to remember.” — Booklist

“Mind-boggling...what a pleasure it is to give oneself up to the book, to be met with discoveries and thrilling upsets at every turn in the labyrinth... it’s the story that triumphs, with a series of last-minute revelations as dazzling as the finale of a fireworks show.” — The Guardian

“Prepare to have your brain fried and your mind blown... an exhilarating, unsettling and invigoratingly original read.” — Charlotte Heathcote, Daily Express

“Stuart Turton’s remarkable debut is something the reader will not have encountered before.” — Financial Times

“It deserves to be a stonkingly popular hit ...Outstandingly enjoyable and addictive.” — Sunday Express (London)

“Audaciously inventive, gripping and original.” — Louise O’Neill, author of Only Ever Yours and Asking For It

“A huge, crumbling mansion, a masquerade ball, exploding fireworks, a devastating murder, and Stuart Turton has set the scene for this intricate mystery … Ingenious.”  — Psychologies

“Completely absorbing and flummoxing and in the end you just have to surrender to its dazzling pyrotechnics. It’s worth it for the sheer brio of the storytelling.” — Val McDermid, Mail on Sunday

STUART TURTON is a freelance journalist who lives in West London with his wife and daughter. He is the author of the international bestseller The Seven Deaths of Evelyn Hardcastle. Stuart is not to be trusted—in the nicest possible way.

Other Works by Stuart Turton