Between Good and Evil

The Stolen Girls of Boko Haram 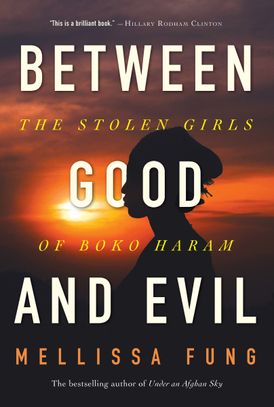 Between Good and Evil

The Stolen Girls of Boko Haram

In April 2014, the world awoke to the shocking news that the terrorist group Boko Haram had kidnapped nearly 300 school-aged girls and taken them deep into the forests of Nigeria. When veteran journalist Mellissa Fung travelled to Nigeria, she discovered that the scope of the kidnappings had been vastly under-reported. Hundreds—possibly thousands—more girls had been taken against their will and forced to become child brides to soldiers and leaders of Boko Haram. Some of the captives escaped and returned to their villages, many with children in tow. Most of these girls, still children themselves, were shunned by their former friends and family. Other girls have never been seen again.

A former captive herself, Mellissa Fung has great empathy for the kidnapped girls. Taken by Taliban sympathizers in Afghanistan, Fung shared her experience in her number-one-bestselling book, Under an Afghan Sky: A Memoir of Captivity. During several visits to Nigeria over four years, she sat down with the girls and their families and conducted hundreds of hours of interviews, listening to horrific stories of capture, rape and torture, as well as escapes and excommunications. Fung tells the stories of Gambo, Asma’u, Zara and other girls taken by Boko Haram. She also portrays strong women fighting against the terrorist group in their own powerful ways: Aisha the Hunter, who moves stealthily into the forest, taking out Boko Haram with her faithful followers, and Mama Boko Haram, an Igbo woman who knows the fighters and those haunted by their experiences and fights to empty the forests of fighters and captives alike. This is raw, honest and heartbreaking storytelling at its best.

"This is a brilliant book, an unflinching intimate history of Nigerian girls who survived capture and struggled to rebuild their lives. Rather than chronicle Boko Haram or the campaign to #bringbackourgirls, Mellissa Fung empowers the girls to speak for themselves, to recount their own fear and survival. She has given us a powerful, gripping portrait that dares us to confront horror and the stamina it takes to survive it." — Hillary Rodham Clinton

"Between Good and Evil is breathtaking and heartbreaking and, for better and worse, deeply human. In prose that is powerful and evocative, Mellissa Fung takes us into the dark heart of Boko Haram, and the terrible ordeal of the girls who were kidnapped. Told from the perspective of those girls and other principals, it is also told by someone who knows what it is like to be taken. And held. This work is important and astonishing, but it is also a riveting read." — Louise Penny, author of A World of Curiosities and the Inspector Gamache novels

"Mellissa Fung never allows us to turn away from the pain of others. With courage, she leads us into the heart of this tragic story. With compassion, she gives a voice to the voiceless. With beautiful writing, she brings their loss into our lives, so that we may share it, and perhaps ease their suffering. Mellissa is unflinching as she goes to the core of this tragedy. And compassionate as she tells their story, giving voice to the voiceless. All done with beautiful prose." — Carol Off, author of All We Leave Behind: A Reporter's Journey into the Lives of Others

MELLISSA FUNG is a veteran journalist, bestselling author and filmmaker. In 2008, as a field correspondent covering Afghanistan for the CBC, she was taken hostage, an experience that led to her number-one-bestselling book Under an Afghan Sky. Her story, and those of three Nigerian girls, were the subject of her first feature documentary, Captive, which premiered in 2021 and has been nominated for several major awards. Since leaving the network, Fung has focused on human rights reporting. Her work has been featured in the Globe and Mail, the Huffington Post, the Walrus and the Toronto Star, and on Al Jazeera, CNN, PBS and other media. She has received numerous awards, including the Gracie Award, a Commonwealth Broadcasting Association award and the New York Festivals Gold and Silver Awards. Mellissa Fung holds a master’s degree in journalism from Columbia University.

Other Works by Mellissa Fung

Under An Afghan Sky

Under An Afghan Sky