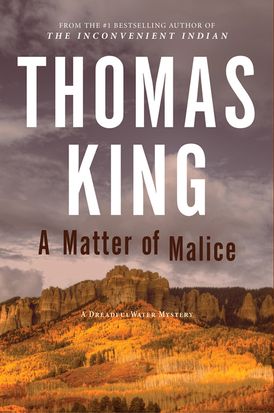 Can a reality TV show solve a cold case?

When a TV producer asks Thumps to assist with an episode about a local woman from a wealthy family whose death was ruled “misadventure,” he is reluctant to get involved. Then the producer dies in the exact same manner, and Thumps finds himself solving two cases.

The crew of Malice Aforethought, a true-crime reality-TV show, shows up in Chinook to do an episode about the death of Trudy Samuels. Trudy’s death had originally been ruled accidental, but with ratings in mind, one of the producers, Nina Maslow, wants to prove it was murder?and she wants Thumps to help. Thumps is reluctant to get involved. But then Nina dies in the exact same place and in the exact same way as Trudy. Are the two deaths related? Or are there two murderers on the loose in Chinook? Thumps uses Nina’s Malice Aforethought files to try to fit the pieces of the puzzle together, and in the process discovers that the producer had already started work on another case that is close to Thumps’s heart: the Obsidian murders.

“Even armchair sleuths who can see the solution from a mile away will appreciate GoodWeather’s unerring knack for converting social, racial, and economic conflict into blissful farce.” — Kirkus Reviews

“The characters are really clever. . . . The dialogue is crisp and just begs to head to the screen.” — The Globe and Mail

“Let’s hope that DreadfulWater shows up again and again.” — Books in Canada

“”The writing is feisty and fast . . . King is having fun here . . . Mark Twain was of the opinion that the truth was the funniest joke in the world. All good satire springs from that notion, and this book qualifies as such.” — The Globe and Mail

“Whimsical and wry, large-hearted and at times laugh out loud funny, but with an underlying gravitas and significance.” — Quill & Quire