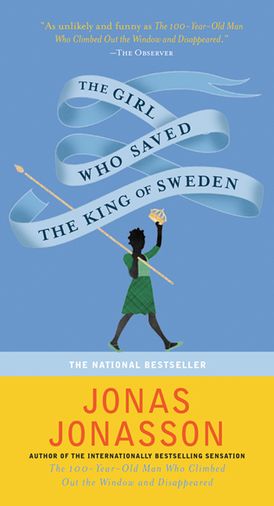 From the author of the five-million-copy bestseller The 100-Year-Old-Man Who Climbed Out the Window and Disappeared comes the charming, original story of one young woman’s unlikely adventure, praised as “a comic delight” (Daily Express).

Quirky, humorous and utterly unique, Jonas Jonasson delights readers once again with The Girl Who Saved the King of Sweden.

On June 14, 2007, the king and the prime minister of Sweden went missing from a gala banquet at the royal castle. Later it was said that both had fallen ill, but the truth is different . . . and oddly entwined with a potato truck and a young former latrine cleaner who will be charged with saving their lives.

Nombeko Mayeki was fated to grow up fast and die young in poverty, but through a combination of cunning, intelligence and sheer determination makes her way up from the latrines and out of her native Soweto with a pocket full of smuggled diamonds, only to be taken prisoner by an incompetent engineer working on South Africa’s secret nuclear arsenal.

The madcap adventure ramps up as the unstoppable Nombeko escapes to Sweden and finds herself not only on the run from both the South African justice system and the most terrifying secret service in the world, but mixed up with twin brothers who are officially only one person—and have a plan to kidnap the Swedish king and prime minister. It is now up to our unlikely heroine to save the day.

The Girl Who Saved the King of Sweden features cameos by real-life figures such as President Jimmy Carter and Nelson Mandela, and is told in the satirical voice that has earned Jonas Jonasson legions of fans the world over.

“A funny and completely implausible farce about a woman, a bomb and a man’s frustrated ambition to overthrow the king of Sweden… The rest of the world will chuckle all the way through it.” - Kirkus Reviews (starred review)

“A funny and improbable tale with characters from South Africa to Sweden demonstrates how even the most seemingly insignificant people can change the fate of the world.” - Denver Post

“As unlikely and funny as The 100-Year-Old Man Who Climbed Out of the Window and Disappeared.” - The Observer

Jonas Jonasson was a journalist for the Expressen newspaper for many years. He became a media consultant and later on set up a company producing sports and events for Swedish television. He sold his company and moved abroad to work on his first novel, The Hundred-Year-Old Man Who Climbed Out of the Window and Disappeared. Jonasson now lives on the Swedish island Gotland in the Baltic Sea. His most recent novel is Hitman Anders and the Meaning of It All.