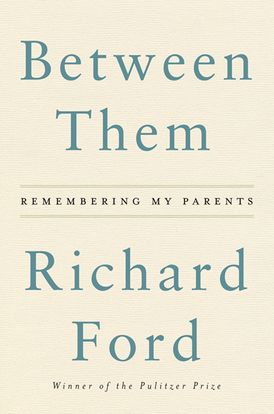 From American master Richard Ford, a memoir: his first work of nonfiction, a stirring narrative of memory and parental love

How is it that we come to consider our parents as people with rich and intense lives that include but also exclude us? Richard Ford’s parents—Edna, a feisty, pretty Catholic-school girl with a difficult past; and Parker, a sweet-natured, soft-spoken traveling salesman—were rural Arkansans born at the turn of the twentieth century. Married in 1928, they lived “alone together” on the road, traveling throughout the South. Eventually they had one child, born late, in 1944.

For Ford, the questions of what his parents dreamed of, how they loved each other and loved him become a striking portrait of American life in the mid-century. Between Them is his vivid image of where his life began and where his parents’ lives found their greatest satisfaction.

Bringing his celebrated candor, wit, and intelligence to this most intimate and mysterious of landscapes—our parents’ lives—the award-winning storyteller and creator of the iconic Frank Bascombe delivers an unforgettable exploration of memory, intimacy, and love.

“[A] novel about big truths told by a writer with clear vision…solid, satisfying craftsmanship. This is a Richard Ford novel in the tradition of his earlier work. It also is a coming-of-age story, and a story about the discovery of identity.” — Washington Independent Review of Books

“[A] deeply felt and magnificently imagined work…With Canada, Ford has given us his deepest exploration yet of weakness and betrayal set amid a boy’s coming of age. It is a memorable novel, suffused with love, sorrow and regret.” — Austin American-Statesman

“…you don’t read the Bascombe books for plot. You read them for Ford’s gleaming sentences, which in Let Me Be Frank are as burnished as ever, and for the quality of Frank’s questing intelligence, which persists in sensing what’s coming.” — USA Today

“[Subtle] stories told with wit and grace… Ford has established himself as one of contemporary America’s most interesting storytellers. Let Me be Frank with You does nothing to diminish this well-deserved reputation.” — New York Journal of Books

“While we’ve seen versions of Ford’s parents in his stories and novels, to have them here in their own right is thrilling, heartbreaking and ultimately enlivening.” — Toronto Star

Richard Ford is the author of The Sportswriter; Independence Day, winner of the Pulitzer Prize and the PEN/Faulkner Award; The Lay of the Land; and the New York Times bestseller Canada. His short story collections include the bestseller Let Me Be Frank With You, Sorry for Your Trouble, Rock Springs and A Multitude of Sins, which contain many widely anthologized stories. He lives in New Orleans with his wife Kristina Ford.

Other Works by Richard Ford

Sorry for Your Trouble

Let Me Be Frank With You