The Making of Canada 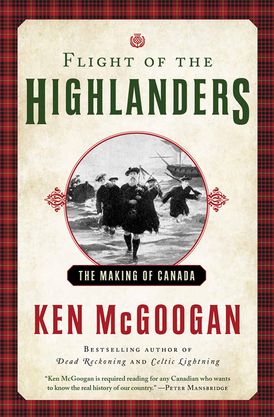 The Making of Canada

Bestselling author Ken McGoogan tells the story of those courageous Scots who, ruthlessly evicted from their ancestral homelands, were sent to Canada in coffin ships, where they would battle hardship, hunger and even murderous persecution.

After the Scottish Highlanders were decimated at the 1746 Battle of Culloden, the British government banned kilts and bagpipes and set out to destroy a clan system that for centuries had sustained a culture, a language and a unique way of life. The Clearances, or forcible evictions, began when landlords—among them traitorous clan chieftains—realized they could increase their incomes dramatically by driving out tenant farmers and dedicating their estates to sheep.

Flight of the Highlanders: The Making of Canada intertwines two main narratives. The first is that of the Clearances themselves, during which some 200,000 Highlanders were driven—some of them burned out, others beaten unconscious—from lands occupied by their forefathers for hundreds of years. The second narrative focuses on resettlement. The refugees, frequently misled by false promises, battled impossible conditions wherever they arrived, from the forests of Nova Scotia to the winter barrens of northern Manitoba.

Between the 1770s and the 1880s, tens of thousands of dispossessed and destitute Highlanders crossed the Atlantic —prototypes for the refugees we see arriving today from around the world. If today Canada is more welcoming to newcomers than most countries, it is at least partly because of the lingering influence of those unbreakable refugees. Together with their better-off brethren—the lawyers, educators, politicians and businessmen—those indomitable Highlanders were the making of Canada.

"...in a time of rising intolerance toward minorities and immigrants, Flight of the Highlanders is a much-needed reality check.  McGoogan's chronicle of how impoverished but tenacious Scots built new lives in Canada - and transformed the country - is a reminder that all of us, regardless of origin or race, want the same things:  a better life and a brighter future." - Dean Jobb, The Scotsman