The Ice Chips and the Invisible Puck 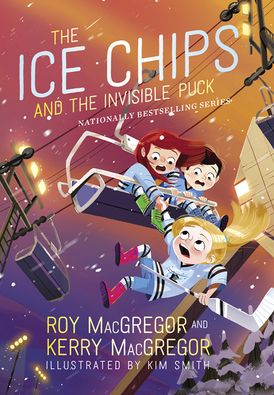 The Ice Chips and the Invisible Puck

The third title in the beloved and bestselling Ice Chips series by acclaimed authors Roy MacGregor and Kerry MacGregor and illustrator Kim Smith, featuring a vibrant and diverse cast of characters and inspiring hockey greats

Would you play on a team with your worst enemy?

Lucas Finnigan and his friends on the Riverton Ice Chips know a thing or two about time travel—at least, they’ve been learning. The magical flooding of their beloved hometown rink has already whisked Lucas, Edge and Swift into the past to meet Gordie Howe and Sidney Crosby when those hockey greats were just kids. That’s how they learned about the roots of the game, and about how far practice can take them . . . but this time?

When goalie Swift is invited onto an all-girls hockey team but refuses to join forces with Chips’ rival Beatrice Blitz, Lucas decides that their only option—even as Swift’s sister, Sadie, guesses their secret—is to leap through time once again.

Pretty soon Lucas, Swift and Sadie find themselves smack in the middle of the Calgary Olympics. A determined young hockey player known as Chicken is in desperate need of new teammates to compete in an Olympic-style match. But do the Chips have what it takes to help Chicken’s team get back in the game and win? And will winning be enough to change Swift’s mind about the new team back home? With a clever lesson from their new friend—who’ll go on to become one of Canada’s best-loved Olympic hockey players—anything is possible.

“A wonderful book about Canada’s greatest game: hockey. . . . The Ice Chips and the Invisible Puck continue to win the hearts of readers (of all ages) with their spunky and endearing characters.” — Resource Links

“Moments of insight and empathy don’t jar or weigh down the story, but are deftly woven into the hometown hockey narrative. . . . It’s not surprising how well-crafted the book is given the pedigree of its authors.” — Quill & Quire, on The Ice Chips and the Magical Rink

ROY MACGREGOR, the media inductee into the Hockey Hall of Fame in 2012, has been described by the Washington Post as “the closest thing there is to a poet laureate of Canadian hockey.” He is the author of the internationally successful Screech Owls hockey mystery series for young readers, which has sold more than two million copies and is published in French, Chinese, Swedish, Finnish, and Czech. The most successful hockey series in history—second only to Anne of Green Gables as a book series for young readers—it was a live-action hit on YTV. MacGregor has twice won the ACTRA Award for best television screenwriting.

KERRY MACGREGOR is co-author of the latest work in the Screech Owls series. She has worked in news and current affairs at the CBC, and as a journalist with the Toronto Star, the Ottawa Citizen, and many other publications. Her columns on parenting, written with a unique, modern perspective on today’s issues and interests, have appeared in such publications as Parenting Times Magazine.

Other Works by Kerry MacGregor

Other Works by Kim Smith

The Ice Chips and the Grizzly Escape

The Ice Chips and the Stolen Cup 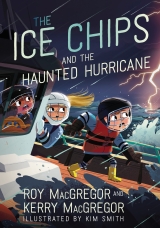 The Ice Chips and the Haunted Hurricane

The Ice Chips and the Killer Wave