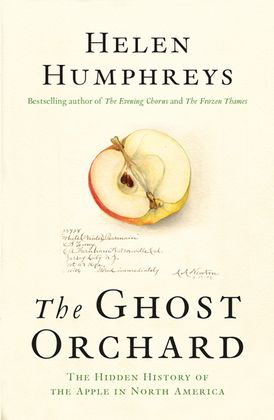 For readers of H is for Hawk and The Frozen Thames, The Ghost Orchard is award-winning author Helen Humphreys’ fascinating journey into the secret history of an iconic food. Delving deep into the storied past of the apple in North America, Humphreys explores the intricate link between agriculture, settlement, and human relationships. With her signature insight and exquisite prose, she brings light to such varied topics as how the apple first came across the Atlantic Ocean with a relatively unknown Quaker woman long before the more famed “Johnny Appleseed”; how bountiful Indigenous orchards were targeted to be taken over or eradicated by white settlers and their armies; how the once-17,000 varietals of apple cultivated were catalogued by watercolour artists from the United States’ Department of Pomology;  how apples wove into the life and poetry of Robert Frost; and how Humphreys’ own curiosity was piqued by the Winter Pear Pearmain, believed to be the world’s best tasting apple, which she found growing beside an abandoned cottage not far from her home.

In telling this hidden history, Humphreys writes movingly about the experience of her research, something she undertook as one of her closest friends was dying. The result is a book that is both personal and universal, combining engaging storytelling, historical detail, and deep emotional insight.

“Humphreys can do so much, can convey so much meaning and move her reader so completely with the starting point of a simple apple. This addition to her already lauded catalogue further proves why she is regarded as one of the country’s best and most thoughtful writers.” — The Globe and Mail

“This is a splendid book, full of memorable and vivid imagery.” — The Globe and Mail, on The Frozen Thames

“Each of its episodes has within it the capacity to do what Humphreys did with the entirety of The Lost Garden.” — Quill & Quire, on The Frozen Thames

“Humphreys has an impeccable command of imagery, and her prose finds strength in its subtlety.” — Publishers Weekly, on The Frozen Thames

“Delicate and incandescent . . . [Humphreys’s] descriptions bristle with nuance, and scenes are pared down to their bare essence.” — San Francisco Chronicle, on The Frozen Thames

“A small, beautiful and highly original book . . . one that is both eccentric and exquisite. It’s a lovely gift for thoughtful readers.” — Edmonton Journal, on The Frozen Thames

“Most curiously wonderful and splendidly written.” — The Sun Times, on The Frozen Thames

Helen Humphreys' novels include several New York Times Notable Books of the Year. Among other awards, she has received the Lambda Prize for fiction and was longlisted for the Dublin Impac. She has written four books of poetry, six novels, and two works of creative non-fiction.