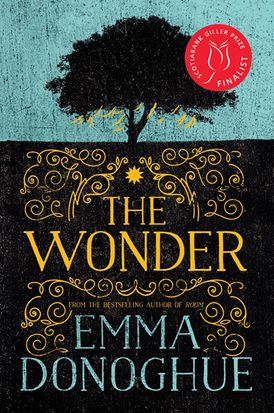 An Irish village is mystified by what appears to be a miracle but may actually be murder in the next masterpiece from New York Times—bestselling author Emma Donoghue.

A village in 1850s Ireland is baffled by Anna O’Donnell’s fast. A little girl appears to be thriving after months without food, and the story of this 'wonder' has reached fever pitch.

Tourists flock in droves to the O'Donnell family's modest cabin, and an international journalist is sent to cover the sensational story. Enter Lib, an English nurse trained by Florence Nightingale, who is hired to keep watch for two weeks and determine whether or not Anna is a fraud.

As Anna deteriorates, Lib finds herself responsible not just for the care of a child, but for getting to the root of why the child may actually be the victim of murder in slow motion.

A magnetic novel written with all the spare and propulsive tension that made ROOM a huge bestseller, THE WONDER works beautifully on many levels—as a simple tale of two strangers who will transform each other’s lives, a powerful psychological thriller, and a story of love pitted against evil in its many masks.

“Room is that rarest of entities, an entirely original work of art. I mean it as the highest possible praise when I tell you that I can’t compare it to any other book. Suffice to say that it’s potent, darkly beautiful, and revelatory.” - Michael Cunningham, Pulitzer Prize-winning author of The Hours

“If you loved Room, you will love The Wonder. And if there is any justice in Canlit, The Wonder will be on the shortlists of the major literary awards this fall. And after that, undoubtedly the Oscars.” - Ottawa Citizen

“Donoghue draws out the narrative suspense with her customary combination of historical verve and emotional delicacy . . . Like Room, this is a thrilling domestic psychodrama that draws its power from quotidian detail as well as gothic horror - The Guardian

“Beautifully moody with the taut pace of a thriller, The Wonder grapples with the potency of love, both human and divine.” - Chatelaine

“A riveting allegory about the trickle-down effect of trauma.” - Vogue

“Eerie. . . . The reader is seduced by the suspense; compelled to pay as close consideration as the nurse in order to understand precisely what’s going on . . . sets a superb pace.” - Irish Times

“A tense gothic page-turner in which nobody, including the unreliable nurse narrator, are entirely what they seem. A powerful exploration of religion and the sway it holds, The Wonder is equal parts psychological drama and unorthodox love story. A thoroughly enjoyable read from one of the country’s premier storytellers. - Toronto Star

“Donoghue is back with a novel as gripping and intense as the popular Room. . . . The prose is so intensely alive, so cinematic that you truly can see the action unfolding before your eyes.” - Ottawa Citizen

“Fresh and unusually lively historical fiction. [Donoghue’s] latest novel brings together both her preoccupation with child peril and her gift for history.” - Vulture

“Donoghue is known for her bestselling novel, Room. . . . [But] she is also well versed in historical fiction. The Wonder brings together the best of all, combining a gracefully tense, young voice with a richly detailed historical setting.” - The Millions

“All spectacle and gothic horror and inevitably hard to put down.” - Jezebel

“With Donoghue’s readable prose and lightness of touch, we find ourselves both pausing for thought and racing forward to see what will become of Anna.” - Irish Independent

“Donoghue’s superb thriller will keep readers hanging on to every word, pondering how far one will go to prove her faith.” - Real Simple

“Threading her stories together like a master weaver, Donoghue takes the reader deeper and deeper into the tapestry of Kissing The Witch. A masterful, gorgeous, and wickedly well written book. - Francesca Lia Block author of Weetzie Bat

“Donoghue is a master of plot, and her prose is especially exquisite in depicting ambiguity. …In The Wonder, Gospel-like in its concern with adversity and hope, miracles are possible–perhaps through God, perhaps through woman.” - Time

Donoghue excels at the microcosm, and her obsessive interest in rooting out the truth makes for a compulsive read. A war is being waged in Anna’s tiny bedroom, and its combatants stand for sides not narrowly confined to the Victorian era: science versus faith, progress versus tradition, rich versus poor. - San Francisco Chronicle

“A fine work, adept and compelling in voice, plot, and moral complexity. . . . Donoghue deals out the cards with real skill.” - Boston Globe

“Fascinating. . . . Like The Turn of the Screw, the novel opens irresistibly, when a young woman with a troubled past gets an enigmatic posting in a remote place. . . . Heartbreaking and transcendent and almost religious in itself.” - New York Times

“Deliciously gothic.... Dark and vivid, with complicated characters, this is a novel that lodges itself deep” - USA Today

“The Wonder unfolds a cagey, suspenseful stand-off . . . Anna receives the author’s full sympathies and is a lively, endearing foil to her incredulous nurse. - Wall Street Journal

“A fable as lean and discomfiting as Anna’s dwindling body. . . . Donoghue keeps us riveted” - Chicago Tribune

“Her contemporary thriller Room (2010) made the author an international bestseller, but this gripping tale offers a welcome reminder that her historical fiction is equally fine.” - Kirkus Reviews (starred review)

“Donoghue’s engrossing novel is loaded with descriptions of period customs and 19th-century Catholic devotional objects and prayers. . . [and] asks daring questions about just how far some might go to prove their faith.” - Publishers Weekly (starred review)

“Readers of historical fiction will gravitate to this tale.” - Seattle Times

“A haunting novel about good vs. evil.” - Popsugar

“What at first seems a simple matter becomes far more-stick with it, the payoff is there.” - Marie Claire