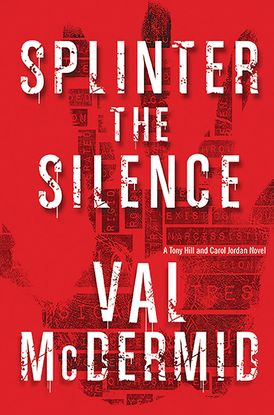 From the author of the #1 bestsellers The Retribution and The Skeleton Road: the next novel in internationally renowned crime writer Val McDermid’s hugely successful Tony Hill and Carol Jordan series, centered on a series of high-profile “suicides” of outspoken women who were the targets of vicious cyberbullying up until their deaths

Widely recognized as one of our finest crime writers, with numerous accolades and legions of devoted readers worldwide, Val McDermid is back with the latest installment in her much beloved series featuring psychologist Tony Hill and former police detective Carol Jordan. Splinter the Silence is an adrenaline-fueled roller coaster guaranteed to keep you on the edge of your seat: a masterful novel centered on the mysterious deaths of several women who were the victims of vicious cyberbullying.

Is it violence if it’s virtual? The outspoken women targeted by the increasingly cruel Internet trolls and bullies would probably say so. For some of them, the torrents of bile and vicious threats prove too much. They begin to silence themselves in a series of high-profile suicides. Or do they? Tony Hill isn’t convinced. But he’s the only one. Former cop Carol Jordan is too busy messing up her life to care. Until she gets an unexpected second chance. Now it’s game on, and the stakes have never been higher.

Unpredictable and unputdownable, Splinter the Silence is a must-read that cements Val McDermid’s place as one of the best crime writers in the business.

“McDermid’s 29th novel proves she has not lost an iota of her expertise.” - Independent (UK)

“McDermid still writes with the telltale verve that’s won her the accolade queen of psychological thrillers.” - The Observer (London)

“Diamond Dagger Award-winner McDermid handles the delicate dance that is the slow reunion of her two heroes with as much grace as she affords the novel’s victims.” - Publishers Weekly

Val McDermid grew up in a Scottish mining community then read English at Oxford. She was a journalist for sixteen years, spending the last three years as Northern Bureau Chief of a national Sunday tabloid. Now a full-time writer, she divides her time between Cheshire and Northumberland. Her novels have won international acclaim and a number of prestigious awards, including the Gold Dagger for best crime novel of the year, the Anthony Award for best novel, and the Los Angeles Times Book of the Year Award. Her thriller series featuring criminal profiler Tony Hill has been adapted into the much-loved TV series Wire in the Blood.

Other Works by Val McDermid