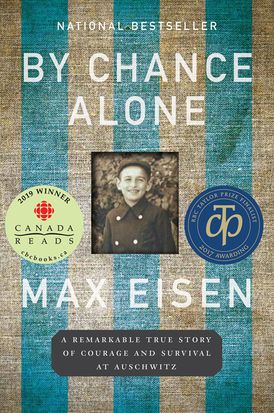 Finalist for the 2017 RBC Taylor Prize

More than 70 years after the Nazi camps were liberated by the Allies, a new Canadian Holocaust memoir details the rural Hungarian deportations to Auschwitz-Birkenau, back-breaking slave labour in Auschwitz I, the infamous “death march” in January 1945, the painful aftermath of liberation, a journey of physical and psychological healing.

Tibor “Max” Eisen was born in Moldava, Czechoslovakia into an Orthodox Jewish family. He had an extended family of sixty members, and he lived in a family compound with his parents, his two younger brothers, his baby sister, his paternal grandparents and his uncle and aunt. In the spring of1944--five and a half years after his region had been annexed to Hungary and the morning after the family’s yearly Passover Seder--gendarmes forcibly removed Eisen and his family from their home. They were brought to a brickyard and eventually loaded onto crowded cattle cars bound for Auschwitz-Birkenau. At fifteen years of age, Eisen survived the selection process and he was inducted into the camp as a slave labourer.

One day, Eisen received a terrible blow from an SS guard. Severely injured, he was dumped at the hospital where a Polish political prisoner and physician, Tadeusz Orzeszko, operated on him. Despite his significant injury, Orzeszko saved Eisen from certain death in the gas chambers by giving him a job as a cleaner in the operating room. After his liberation and new trials in Communist Czechoslovakia, Eisen immigrated to Canada in 1949, where he has dedicated the last twenty-two years of his life to educating others about the Holocaust across Canada and around the world.

The author will be donating a portion of his royalties from this book to institutions promoting tolerance and understanding.

“An astounding narrative . . . a timely examination of the human capacity for cruelty, ignorance, and depravity. It is also a message of hope, a cri de coeur, and a reminder that small acts of kindness can have an immeasurable impact on another person’s life.” — Quill & Quire

“Max Eisen’s important, timely memoir reminds us that horror does not happen overnight and that no one is immune to it. By Chance Alone is a testimony to the human experience of needless, senseless suffering. May we learn from it.” — Marina Nemat, author of Prisoner of Tehran

“By Chance Alone is a story of great pathos, and told with directness and simplicity, of the sufferings and grief and fear of one boy in a terrible time and a terrible place.” — Rex Murphy

Such were the overwhelming odds stacked against him, Max Eisen should not have survived. Chance, some good people, and not a little luck all played their part, but his dogged determination to overcome the lethal physical and mental onslaught is truly remarkable.” — Stephen D. Smith, Executive Director, USC Shoah Foundation

Max Eisen reveals, with clarity and honesty, his personal resilience and determination to survive against impossible odds, and bear witness to the horrors of Auschwitz. His humanity and generosity shine through in this powerful and page-turning memoir.” — Barbara J. Falk, PhD, MSL Associate Professor, Department of Defence Studies Canadian Forces College/Royal Military College of Canada

MAX EISEN is a Hungarian Jew who was deported to Auschwitz in the spring of 1944. He is a passionate speaker and educator who volunteers at the Sarah and Chaim Neuberger Holocaust Education Centre and the Friends of Simon Wiesenthal Center in Toronto. He currently resides in Toronto with his wife, Ivy.

Other Works by Max Eisen