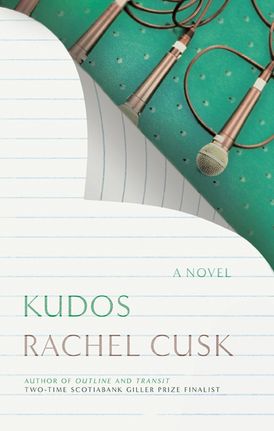 Rachel Cusk, the award-winning and critically acclaimed author of Outline and Transit, completes the transcendent literary trilogy with Kudos, a novel of unsettling power.

A woman writer visits a Europe in flux, where questions of personal and political identity are rising to the surface and the trauma of change is opening up new possibilities of loss and renewal. Within the rituals of literary culture, Faye finds the human story in disarray amid differing attitudes toward the public performance of the creative persona. She begins to identify among the people she meets a tension between truth and representation, a fissure that accrues great dramatic force as Kudos reaches a profound and beautiful climax.

In this conclusion to her groundbreaking trilogy, Cusk unflinchingly explores the nature of family and art, justice and love, and the ultimate value of suffering. She is without question one of our most important living writers.

“The exhilarating finale of Rachel Cusk’s magnificently unclassifiable trilogy of novels . . . With her typical acerbic wit, Ms Cusk skewers the pretensions of the literary world while simultaneously upholding the intrinsic value of literature―no small feat . . . A daring bonfire of hypocrisies and emotions.” - The Economist

“High-stakes and bracingly compelling . . . Cusk’s brilliantly reasoned argument against the false security of narrative continues to hit a nerve.”  - Vogue

“Kudos achieves a kind of formal perfection. Rarely does a single word of its exceptionally polished prose seem out of place . . . Cusk has triumphed in the completion of this masterly trilogy.”  - Slate

“This is a novel of ideas, intelligent, original in form and content, and brilliantly engaging . . . Kudos is rich and compelling. It confirms Rachel Cusk’s status as one of the most interesting contemporary writers―avant-garde, highly original, challenging but entirely accessible.”  - Irish Times

“Kudos is an education . . . [Cusk] has found, in this cool and collected new mode, a mature voice that looks abstract yet feels intimate and brightly present . . . Cusk has inherited the gift of holding our attention as she shows us the things that humans do.” - The Times (London)

“Every element of the [Outline] novels conveys a strenuous sense of discipline. The effect is of watching an oracle divine fearsome and inscrutable truths from on high, then render them into stories fit for mortals . . . Mesmerizing.” - The Cut

“A triumphant finish to an ambitious, unconventional trilogy cements Cusk’s position as one of today’s most original fiction writers. The charged delicacy of these books is underpinned by what is sure to be their durability as literature.”  - Toronto Star

“[Kudos] stayed with me long after I had finished it. Composed of a series of conversations, it is captivating and incredibly well written.”  - The Guardian

“Quietly staggering and intellectually entrancing . . . [Cusk’s] writing is silvery and precise . . . These novels are among the most important written in this century so far.”  - The Globe and Mail

“A stellar accomplishment.” - The Guardian

“With the release of Kudos, these three novels can now be appreciated―and will surely be looked back on―as one of the literary masterpieces of our time.”  - Washington Post

“[Cusk] has achieved something both radical and beautiful . . . [Kudos is] a book about failure that is not, in itself, a failure. In fact, it is a breathtaking success.” - The New Yorker

“Cusk’s final book in a trilogy (after Outline and Transit) expertly concludes the story of protagonist Faye . . . As always, Cusk’s ear for dialogue and language is stunning. The author ends Faye’s trilogy with yet another gem.”  - Publishers Weekly (starred review)

“Brilliantly aware without being indulgent or preachy, this novel has the intense beauty of form that has marked Cusk’s trilogy from the beginning, and the final installment does not disappoint.”  - Booklist (starred review)