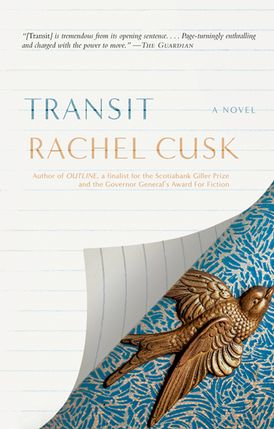 The stunning new novel from the author of Outline, a finalist for the Scotiabank Giller Prize and one of The New York Times Book Review’s Ten Best Books of the Year

In the wake of family collapse, a writer moves to London with her two young sons. The process of upheaval is the catalyst for a number of transitions—personal, moral, artistic, practical—as she endeavors to construct a new reality for herself and her children. In the city she is made to confront aspects of living she has, until now, avoided, and to consider questions of vulnerability and power, death and renewal, in what becomes her struggle to reattach herself to, and believe in, life.

Filtered through the impersonal gaze of its keenly intelligent protagonist, Transit sees Rachel Cusk delve deeper into the themes first raised in her critically acclaimed novel Outline, and offers up a penetrating and moving reflection on childhood and fate, the value of suffering, the moral problems of personal responsibility, and the mystery of change. In this precise, short, and yet epic novel, Cusk manages to describe the most elemental experiences, the liminal qualities of life, through a narrative near-silence that draws language toward it. She captures with unsettling restraint and honesty the longing to both inhabit and flee one’s life and the wrenching ambivalence animating our desire to feel real.

“Cusk is a master of sparse, exquisite prose. . . . [Outline] successfully conveys all of her admirable honesty in the safe harbour of fiction, and somehow delivers more human truths than most memoirs ever could.” - The Globe and Mail

“A stellar accomplishment.” - The Guardian

“One of the most daringly original and entertaining pieces of fiction I’ve ever read.” - The Observer

“Brave and uncompromising in its literary ambition, Transit is a work of cut-glass brilliance that quietly insists on the reader’s thoughtful attention. One beautifully crafted sentence follows another.” - Rebecca Abrams, The Financial Times

“[Transit’s] themes of transience and dislocation are contiguous with a broader conversation about the fluidity of identity resulting, in part, from an increasingly—and contentiously (see Brexit, Trump, etc.)—borderless planet.” - The Globe and Mail

“One of our most astute writers. . . . Cusk is very good at creating characters who seem fresh; they blossom under her pen. . . . This is part of what makes [Transit] so effective and smart.” - Quill & Quire (starred review)

“Cusk is now working on a level that makes it very surprising that she has not yet won a major literary prize. Her technical originality is equaled by the compelling nature of her subject matter, and Transit is a very fine novel indeed.” - The Observer

“[Transit] is tremendous from its opening sentence. . . . Cusk is always an exciting writer: striking and challenging, with a distinctive cool prose voice, and behind that coolness something untamed and full of raw force. . . . page-turningly enthralling and charged with the power to move.” - The Guardian

“[Transit] is a delightfully fun read. Cusk knows how to write a great novel, and this one satisfies on many levels . . . she is producing work that is beautifully refined.” - The Times (UK)

“Beneath [Transit’s] placid surface, themes of displacement and the desire for transformation and authenticity rumble like small, violent earthquakes. It’s also gruesomely funny: the final part, which describes a particularly poncey dinner party, is like something from a horror story. Strange, frightening and brilliant.” - Daily Mail (UK)

“Brilliantly written and structured, which is nothing new from this superlatively gifted writer.” - Kirkus Reviews

“With the sparest prose, Cusk has again created an expertly crafted portrait in this distinctive novel about the fear and hope that accompany change, and one woman’s quest to conquer them. A masterful second installment to a promising trilogy.” - Booklist (starred review)

“Alienating yet intimate, dreamlike yet grounded, slim yet substantial, delicate but fierce, Cusk’s writing feels, exhilaratingly, unlike any other fiction being written these days.” - Toronto Star

“A novel no less dedicated to uncovering what it feels like to be human. . . . The daisy chain of encounters made for addictive reading.” - <em>Literary Review of Canada</em>

“In Transit, Rachel Cusk masters the art of revealing the one through the many.” - National Post

“A work of stunning beauty, deep insight and great originality. . . . Compulsively readable. . . . It is a work of great ambition, beautifully executed, a worthy successor to the brilliant Outline, and a harbinger of great hope for the third and final installment—soon may it arrive. - New York Times Book Review

“A reading journey you wish didn’t have to end . . . Cusk gives us engrossing, probing conversations . . . Her prose is exquisitely precise.” - NPR

“Such deft positioning is Cusk at her most brilliant, feminist best-a reminder that she, and her readers, won’t be pinned down by stories, but freed.” - Elle

“That Cusk makes such satisfying and original use of [her tribulation] is something of a modern literary phenomenon.” - The Buffalo News

“How much should we say, this novel asks, and when should we say it? To whom? In Cusk’s case, a few words are enough to keep readers engrossed, waiting for more.” - The Minneapolis Star Tribune

“Rachel Cusk is returning fiction to its roots in storytelling . . . Cusk’s goal . . . [is] the establishment of a compelling, dreamlike language and worldview that are utterly her own.” - Washington Post

“With literary sleight of hand, Cusk is playing narrative tricks, and Transit, like Outline before it, slowly reveals much about Faye, too, no matter how concealed she tries to remain. Transit is a brilliant meditation on change, freedom and the ways we construct our lives.” - BookPage

“Cusk is one of the most lucid, powerful novelists working today, and Transit reflects her ability to make a profound impact with deceptively simple and always elegant prose.” - Nylon Magazine

“Cusk’s writing is the literary equivalent of a glass of Greek white: cool, bracing, a little salty.” - Vogue

“Cusk’s story-invention powers are so rich that the format feels as fresh the second time around as it did the first.” - Seattle Times

“[I]n her effort to expose the illusions of both fiction and life, she may have discovered the most genuine way to write a novel today.” - The Atlantic

“[Transit] rests its claim to our attention on the consistent keenness of its insights into our human relationships.” - Shelf Awareness

“Cusk’s ear for language and dialogue is sharp; her characters speak about universal ideas, such as anxiety and lust. This marvelous novel continues the author’s vivid exploration of the human condition.” - Publishers Weekly (starred review)

“The rare capital-L Literary writer who can make an entire novel about irresolution feel as gripping and binge-worthy as any thriller.” - Humber Literary Review