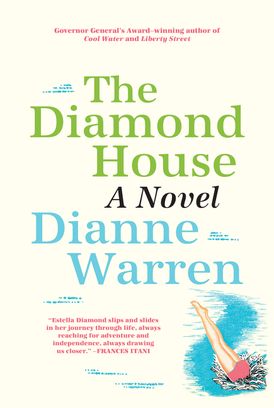 WINNER OF THE GLENGARRY BOOK AWARD

WINNER OF THE CITY OF REGINA BOOK AWARD

From the winner of the Governor General’s Literary Award, an engaging new novel about the unconventional Estella Diamond and her struggle with the expectations that bind her family

Estella Diamond is the youngest child and only daughter of a successful brick-factory owner, a self-described family man who is not averse to being called a kingpin. Estella’s precocious nature leads her to discover something none of her brothers know: that their father was once married to an aspiring ceramics artist named Salina, who dreamed big and turned her back on society’s conventions.

Estella grows up planning her future in the image of her father’s daring first wife, rather than that of her traditional mother. When her plans are derailed again and again by the family patriarchy, she longs to rebel and be like Salina. Unable to openly challenge her father, and with a chorus of sisters-in-law passing judgment, she does the right thing instead, and plays the role of the good daughter.

The effects of Estella’s rebellion will stay with her and the family for years, until she is left alone in the house her father built with only her housekeeper, Emyflor, for company. When an uncompromising young woman named Hannah Diamond enters her world, Estella is forced to wrestle with the legacy she helped create and to confront the woman she has become, just in time for one last reinvention.

Praise for Liberty Street Finalist for a High Plains Book Award, a Saskatchewan Book Award and the City of Regina Books Award. A Winnipeg Free Press Favourite Read of the year. —

“Suffused with details of small-town life and feelings of regret, [Liberty Street] has the seductive melancholy of a country song being played on a long drive home. . . .[A] mesmerizing tale of bad choices and their consequences.” — New York Times Book Review

“A story of compassion, redemption and of coming to terms with one’s past told with intelligence, humour and wit.” — Winnipeg Free Press

“A meander through complex emotional terrain.” — The Globe and Mail

DIANNE WARREN is the author of the Governor General’s Award–winning novel Cool Water, as well as the novel Liberty Street, three books of short fiction and three plays. Her play Serpent in the Night Sky was short-listed for a Governor General’s Award for Drama. She is the recipient of the Marian Engel Award for a female writer in mid-career, and the Cheryl and Henry Kloppenburg Award for Literary Excellence. Warren lives with her husband, a visual artist, in Regina, Saskatchewan.

Other Works by Dianne Warren