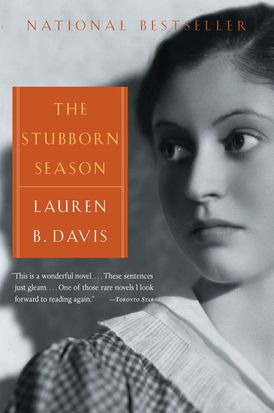 Where does one person end and the other begin? That’s the question that haunts Irene, a girl growing up in Toronto during the Great Depression. Living with her father, a pharmacist who finds comfort in the bottle, and her mother, a woman teetering on the edge of her own depression, Irene’s crumbling family situation mirrors the economic and social turmoil just beyond the front door of their respectable, working class neighborhood. As she grows into a young woman, Irene finds herself consumed by her mother’s increasingly erratic moods and isolated from a world where unemployment, poverty and bigotry have taken firm root in the water-starved soil of town and country. Yet in the midst of lives that seem lost, Irene finds strength in the unlikely form of David, a young man from the Jewish farming community of Sonnerfeld, Alberta, who is fighting his own battle for dignity, hope and a place in the world.

The Stubborn Season is an utterly compelling first novel, peopled with vivid characters and set against an era that emanates magically from every page. This is a story alive with the claustrophobic darkness of a Victorian row house; the icy loneliness of life riding the rails as a “box car cowboy”; the languid feel of a steamy Sunday afternoon when respectable people closed their stores, and their lives, against intrusion; and the stench of fear in a jail cell packed with communist agitators desperate to change a broken system. It is a story that is hard to put down, intimate in its knowledge of human struggles and strengths, wonderfully written, and altogether satisfying.