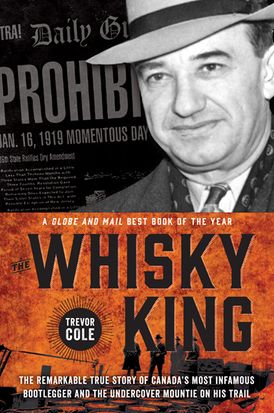 “True-crime writing at its finest.” —Dean Jobb, author of Empire of Deception

A rich and fascinating history of Canada’s first celebrity mobster, Rocco Perri—King of the Bootleggers—and the man who pursued him, Canada’s first undercover Mountie, for readers of Erik Larson, Dean Jobb and Charlotte Gray

At the dawn of the 20th century, two Italian men arrived in Canada amid waves of immigration. One, Rocco Perri, from southern Italy, rose from the life of a petty criminal on the streets of Toronto to running the most prominent bootlegging operation of the Prohibition era, taking over Hamilton and leading one of the country’s most influential crime syndicates. Perri was feared by his enemies and loved by the press, who featured him regularly in splashy front-page headlines. So great was his celebrity that, following the murder of his wife and business partner, Bessie Starkman, a crowd of 30,000 thronged the streets of Hamilton for her funeral.

Perri’s businesses—which included alcohol, drugs, gambling and prostitution—kept him under constant police surveillance. He caught the interest of one man in particular, the other arrival from Italy, Frank Zaneth. Zaneth, originally from the Italian north, joined the RCMP and became its first undercover investigator—Operative No. 1. Zaneth’s work took him across the country, but he was dogged in his pursuit of Rocco Perri and worked for his arrest until the day Perri was last seen, in 1944, when he disappeared without a trace.

With original research and masterful storytelling, Cole details the fascinating rise to power of a notorious Prohibition-era Canadian crime figure twinned with the life of the man who pursued him.

“A superb book of historical non-fiction. . .by a writer at the top of his game.” — The Globe and Mail

“The book is branched with characters from a John Huston epic: piano-playing wharf rats; Mafia reprobates. . . . Yet the book rests with its two principals, who, in the end, come to represent the yin and yang of Southern Ontario, and, perhaps, Canada.” — <em>Toronto Star</em>

“Who knew that southern Ontario’s Golden Horseshoe was also a nefarious hotbed of illegal bootlegging, drug peddling, gambling, extortion, roadside slayings, and bullet-riddled bodies sent to sleep with the fishes of the Welland Canal? . . . Entertaining. . . . The subject matter is well suited to Cole.” — <em>Quill & Quire</em>

“Trevor Cole takes readers on a fascinating journey through the Italian Canadian underworld of the early twentieth century. The research is impeccable and the dramatic pace never falters in this intriguing tale of immigrants turning to crime and running rings around the authorities.” — Charlotte Gray, award-winning author of The Promise of Canada and The Massey Murder

Calling on his immense gifts as a novelist, Trevor Cole tells the true story of Rocco and Bessie Perri, the “King and Queen of Bootlegging” in Hamilton. . . An illuminating, disturbing, and well-paced read.” — Rosemary Sullivan, award-winning author of Stalin's Daughter: The Extraordinary and Tumultuous Life of Svetlana Alliluyeva

“Trevor Cole is a veteran journalist with a novelist’s eye. He deftly lifts mobster Rocco Perri from the lake bottom or grave or whereever he ended up and brings him back to life on the page.” — Peter Edwards, author of Hard Road: Bernie Guindon and the Reign of the Satan's Choice Motorcycle Club and co-author of Business or Blood: Mafia Boss Vito Rizzuto's Last War

“Trevor Cole is a masterful stylist and The Whisky King a tall Canadian crime tale taht just happens to be true. Popular history at its outsized, plot-driven best.” — Charles Foran, award-winning author of Mordecai: The Life and Times

Other Works by Trevor Cole