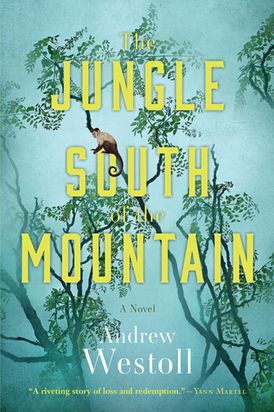 In an unnamed country on the northern coast of South America, scientist Stanley is deeply embedded in the life of the rainforest. He’s been studying a troop of capuchin monkeys for eight years—seven since his wife, Maria, left him, and their mentor, Professor Collymore, mysteriously disappeared.

The country is preparing for a hotly contested election, which promises to unleash ancient tensions among the populace. Stanley, however, is oblivious to this, focused only on his research and his conviction that Maria will one day come back to him. But then his research is violently threatened: one of his beloved monkeys goes missing, and then another. Something is killing them, one by one. Stanley decides to take matters into his own hands, but soon learns that there are forces in the jungle as difficult to quell as the spirit of rebellion brewing in the south. Soon, Stanley finds everything he holds dear—his livelihood, his monkeys, his very life—in danger. The Jungle South of the Mountain is a powerful, brilliantly imagined novel about the stories we believe, the lies we tell and the choices we make to protect what we love.

“With compelling realism, recalling both Graham Greene and Joseph Conrad, Andrew Westoll tells a riveting story of loss and redemption in the jungles of South America.” — Yann Martel, Booker Prize-winning author of LIFE OF PI

“This is a haunting story so impressively told; an evocative and absorbing first novel.” — Amy Stuart, bestselling author of Still Mine

“The Jungle South of the Mountain is a gripping study of foreignness, whether it be within relationships, geographies, or even between species. Andrew Westoll’s first novel is as engaging as it is thoughtful.” — Andrew Pyper, author of The Damned and The Demonologist

“A fascinating read, beautifully written, and with a gripping story.” — SJ Watson, author of Before I Go To Sleep

“A captivating story, set in an original and fascinating world rich in authentic detail.” — Cecilia Ekback, author of Wolf Winter

ANDREW WESTOLL is an award-winning narrative journalist and internationally published author. A former biologist and primatologist-in-training, his books include The Riverbones, a travel memoir set in the jungles of Suriname, and The Chimps of Fauna Sanctuary, which was a national bestseller and winner of the Charles Taylor Prize for Literary Non-Fiction. The Jungle South of the Mountain is his first novel. Westoll teaches creative writing and English literature at the University of Toronto Scarborough.

Other Works by Andrew Westoll