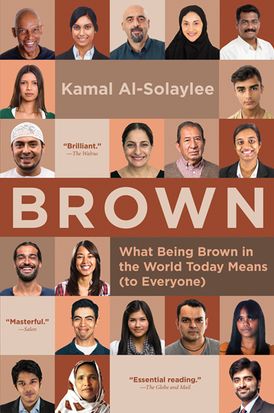 49th Shelf’s Our Best Books of the Year

Walrus Best Book of the Year

Chatelaine Best Books of the Year

Winner of the Shaughnessy Cohen Prize for Political Writing

With the urgency and passion of Ta-Nehisi Coates (Between the World and Me), the seductive storytelling of J.D. Vance (Hillbilly Elegy) and the historical rigour of Carol Anderson (White Rage), Kamal Al-Solaylee explores the in-between space that brown people occupy in today’s world: on the cusp of whiteness and the edge of blackness. Brown proposes a cohesive racial identity and politics for the millions of people from the Global South and provides a timely context for the frictions and anxieties around immigration and multiculturalism that have led to the rise of populist movements in Europe and the election of Donald Trump.

At once personal and global, Brown is packed with storytelling and on-the-street reporting conducted over two years in ten countries on four continents that reveals a multitude of lives and stories from destinations as far apart as the United Arab Emirates, the Philippines, the United States, Britain, Trinidad, France, Hong Kong, Sri Lanka, Qatar and Canada. It features striking research about the emergence of brown as the colour of cheap labor and the pursuit of a lighter skin tone as a global status symbol. As he studies the significance of brown skin for people from North Africa and the Middle East, Mexico and Central America, and South and East Asia, Al-Solaylee also reflects on his own identity and experiences as a brown-skinned person (in his case from Yemen) who grew up with images of whiteness as the only indicators of beauty and success.

This is a daring and politically resonant work that challenges our assumptions about race, immigration and globalism and recounts the heartbreaking stories of the people caught in the middle.

“Impressive and expansive . . . essential reading, not only for brown people seeking connection or explanation, but for anyone with any stake in understanding the non-white world.” - The Globe and Mail

“Kamal Al-Solaylee has written one of the most important books to come out of Toronto this year. . . A fascinating read.” - Toronto Star

“A masterful fusion of Al-Solaylee’s own observations, anecdotes from his interview subjects and analysis . . . Brown reads almost like an identity-politics thriller, as vivid as it is informative . . . one of those important books that will stay with you.” - Salon.com

“Brown explores wide-ranging issues of race with humanity and grace. . . . Al-Solaylee is a splendid writer, achieving in Brown that rare feat: a work that is clear and complex, elegant and heartfelt.” - Kerri Lee Powell, author of the Willem de Kooning’s Paintbrush, Finalist for the Giller Prize and the Writers’ Trust Fiction Prize

“Brown is a work of such intelligence, depth, uniqueness and compassion. . . . A rare accomplishment--a glimpse into another world from within that world. Masterful, original, insightful and ultimately essential reading.” - Deepa Mehta, award-winning director of Water and Midnight’s Children

“In this extraordinary book, Kamal Al-Solaylee gives a name, an identity and a story to the disparate billions whose labours, migrations and struggles define our time. A stirring narrative, an empowering manifesto and an unprecedented bid for recognition. This book will change the way you see the world.” - Doug Saunders, The Globe and Mail, and author of Arrival City and The Myth of the Muslim Tide

“Brown is audacious and original, heartfelt and intrepid. By going behind the scaffolding, Kamal Al-Solaylee raises important questions about the hidden foundations of our unfolding century.” - Charles Foran, author of Mordecai: The Life and Times

“Kamal Al-Solaylee perfectly captures the beauty and heartbreak of being brown. This ambitious and powerful book is mandatory reading for anyone who wants to understand the complexities of race relations in our globalized world. You’ll never see a brown person in the same way again.” - Zarqa Nawaz, author of Laughing All the Way to the Mosque and creator of Little Mosque on the Prairie

“Brown is a riveting exploration of the ambiguities of race and a window on a multitude of worlds. It’s also thoroughly researched, beautifully argued, and written with grace and clarity.” - Michael Redhill, award-winning author of Martin Sloan and Consolation

“Timely and topical, and has much to teach readers, especially as racial tensions grow in North America. . . . forces everyone to look at how countries are still built along racial lines, while asking questions about identity.” - Daily Herald-Tribune (Grande Prairie)

“Thoughtful and refreshing, Brown has a chance to become a made-in-Canada intellectual landmark.” - Jury Citation for the Shaughnessy Cohen Prize for Political Writing

“Packed with storytelling and on-the-street reporting conducted over two years in ten countries from four continents that reveal a multitude of lives and stories.” - Jury Citation for the Trillum Book Award

KAMAL AL-SOLAYLEE is the author of the nationally bestselling memoir Intolerable: A Memoir of Extremes, which won the 2013 Toronto Book Award and was a finalist for the CBC’s Canada Reads, as well as the Hilary Weston Writers’ Trust Prize for Nonfiction. His second book, Brown: What Being Brown in the World Today Means (to Everyone), was hailed as “brilliant” by the Walrus magazine and “essential reading” by the Globe and Mail. A finalist for the Governor General’s Literary Award for Nonfiction as well as the Trillium Book Award, Brown won the Shaughnessy Cohen Prize for Political Writing. A two-time finalist for the National Magazine Awards, Al-Solaylee won a gold medal for his column in Sharp in 2019. He holds a Ph.D. in English and is Director of the School of Journalism, Writing, and Media at the University of British Columbia.