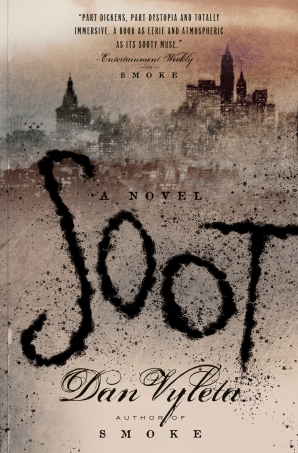 The electrifying sequel to the national bestseller Smoke—bringing readers back to a world Entertainment Weekly called “part Dickens, part dystopia and totally immersive."

The year is 1909. It has been ten years since Thomas Argyle, Charlie Cooper and Livia Naylor set off a revolution by releasing Smoke upon the world. They were raised to think Smoke was a sign of sin manifest, but later learned that its suppression was really a means of controlling society. Smoke allowed people to mingle their emotions and truly connect, and the trio hoped that freeing the Smoke would bring down the oppressive power structure, creating a fair and open society. But the consequences were far greater than they had imagined, and the world has fractured.

Erasmus Renfrew, the avowed enemy of Smoke, is now Lord Protector of what remains of the English state. Charlie and Livia live in Minetowns, an egalitarian workers' community in the north of England that lives by Smoke. Thomas Argyle is in India on a clandestine mission to find out the origins of Smoke, and why the newly risen East India Company is mounting an expedition in the Himalayas.

Mowgli, the boy from the jungle, whose body was used to trigger the tempest that unleashed the Smoke, now makes a living as a chameleon-like thief in New York. And Elizabeth Renfrew, Erasmus's niece, who was the subject of his cruel experiments in suppressing Smoke, is in hiding from her uncle in provincial Canada. What she endured has given her a strange power over Smoke, which she fears as much as her uncle.

Believing her uncle's agents have found her, Elizabeth flees to New York with a theatre troupe led by Balthazar Black, an impresario with secrets of his own. There they encounter Mowgli and a Machiavellian Company man named Smith.

All these people seek to discover the true nature of Smoke and thereby control its power. As their destinies entwine, a cataclysmic confrontation looms. The Smoke will either bind them together or rend the world apart.

“Vyleta writes with intricacy and imagination and skillful pacing; never once would I have considered putting his book down.” — The New York Times Book Review

“Vyleta has woven a powerful fictional spell, creating both an entire world (as believable as it is incredible) and a richly crafted cast of characters. It’s a unique and unforgettable, reading experience.”

“Vice is made visual in Vyleta’s sprawling, ambitious novel, a Dickensian tale tinged with fantasy . . . which Vyleta reveals with lovely, visceral prose and expert pacing. (A-)”
— Entertainment Weekly

“In Vyleta’s alternate-history 19th-century Britain, evil thoughts and wicked deeds are exuded from the body in a black cloud—an intriguing conceit that lingers in the imagination long after the novel is finished.”
— The Guardian

“Smoke is one of the most original and enthralling books I have read in a long time. . . The book is absolutely stunning. Smoke is an addictive combination of thriller, fantasy, and historical novel, with a dash of horror. It’s chilling and complex and amazingly imaginative.”

“Full of otherworldly adventure yet chilling in its realism, Smoke lures readers into considering these questions about society and ourselves.”

“The novel’s sumptuous, irresistible narrative--filled with plenty of twists and turns and imagination--will satisfy any reader. A terrific, suspenseful tale.”

“A fiercely inventive novel set in a late Victorian Britain at once recognizable and intricately transformed. . . . Vyleta’s bold concept and compelling blend of history and fantasy offer a provocative reflection on the nature of evil, power, belief, and love.”

“Vyleta’s alternative history immerses us in a dystopian version of late Victorian England where the discernibility of sin ... has created a world divided along both class and moral lines: a pristine elite rules over a soot-encrusted proletariat whose inferiority is rendered both tangible and justifiable.”

“Mesmerising and imaginative . . . a novel that tackles the most fundamental question of good versus evil.”

“Dan Vyleta has conjured a rich and surprising counterhistory, an England saturated with a substance so potent and evocative it vaults instantly into the pantheon that includes the dust of Philip Pullman, the soma of Aldous Huxley, and the opium of Amitav Ghosh. Smoke is thrilling.”

“Vyleta’s command of language is as haunting and intangible as smoke itself, and the varying story lines depict the cross sections of intimacy and honesty, colonialism and capitalism. Smoke broached tough questions about human nature and power structures; Soot probes them with even more nuance and sophistication.”  — Booklist

“Vivid and memorable. . . . A superior piece of ambitious writing . . .Such a richly meticulous novel that I suspect that it will be one I’ll be thinking about long after I finished it.”  — SFF World