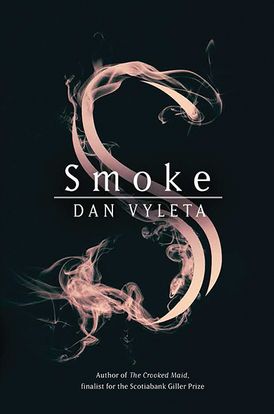 “Smoke is well worth reading. Vyleta has woven a powerful fictional spell, creating both an entire world (as believable as it is incredible) and a richly crafted cast of characters. It’s a unique and unforgettable, reading experience.” — National Post

“Vyleta writes with intricacy and imagination and skillful pacing; never once would I have considered putting his book down.” — The New York Times

“Vice is made visual in Vyleta’s sprawling, ambitious novel, a Dickensian tale tinged with fantasy . . . which Vyleta reveals with lovely, visceral prose and expert pacing. (A-)” — Entertainment Weekly

“In Vyleta’s alternate-history 19th-century Britain, evil thoughts and wicked deeds are exuded from the body in a black cloud—an intriguing conceit that lingers in the imagination long after the novel is finished.” — The Guardian

“Smoke is one of the most original and enthralling books I have read in a long time. . . The book is absolutely stunning. Smoke is an addictive combination of thriller, fantasy, and historical novel, with a dash of horror. It’s chilling and complex and amazingly imaginative.” — Shelf Awareness

“Full of otherworldly adventure yet chilling in its realism, Smoke lures readers into considering these questions about society and ourselves.” — Booklist (starred review)

“The novel’s sumptuous, irresistible narrative--filled with plenty of twists and turns and imagination--will satisfy any reader. A terrific, suspenseful tale.” — Kirkus Reviews

“A fiercely inventive novel set in a late Victorian Britain at once recognizable and intricately transformed. . . . Vyleta’s bold concept and compelling blend of history and fantasy offer a provocative reflection on the nature of evil, power, belief, and love.” — Publishers Weekly (starred review)

“Mesmerising and imaginative . . . a novel that tackles the most fundamental question of good versus evil.” — The Observer

“Dan Vyleta has conjured a rich and surprising counterhistory, an England saturated with a substance so potent and evocative it vaults instantly into the pantheon that includes the dust of Philip Pullman, the soma of Aldous Huxley, and the opium of Amitav Ghosh. Smoke is thrilling.” — Robin Sloan, bestselling author of Mr. Penumbra's 24-Hour Bookstore

“A novel that stays in the imagination long after it is read.” — The Guardian