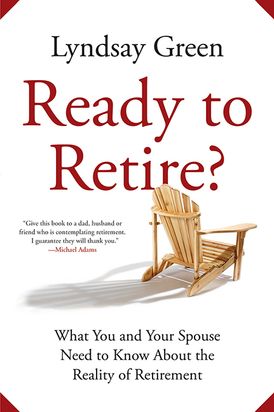 Conceived and written for those about to retire - or already in retirement and the women (and men) who live with them. Ready to Retire? helps people understand what they and their partners are going through as they meet the new reality of life beyond the workplace.

Cultural messaging has traditionally reinforced the idea of the man as bread winner and men have a particularly hard time making the retirement adjustment as they so often completely self-identify with their work. In light of this cultural trend, bestselling author and sociologist Lyndsay Green sets out to demystify retirement for men and their partners, and provides an engaging and uplifting portrait of the emotional landscape of men in their sixties and seventies.

While most books on this subject focus on finances, Lyndsay Green writes more about the psychological implications of retirement. More descriptive than instructional, the book is based on interviews with over sixty people, from age 56 to 88, living in cities, small towns and rural areas.

In spite of the fact that many men have a deep-rooted fear about retirement, and that so often their spouses can be baffled by their inability to express those fears and needs, Lyndsay Green discovered that the story of men’s retirement is mostly one of adjustment, revitalization and reinvention. Ready to Retire? is an inspiring portrait of the emotional lives of men who have retired or are considering retirement, and the women (and men) they live with.

“Insightful, comprehensive, incredibly helpful. As a “delayed retiree” I found Lyndsay’s book touched on every issue that I have been thinking about. It’s not a retirement roadmap, but it tells me how to develop one!” — The Hon. John Manley, Former Deputy Prime Minister of Canada, President and CEO of the Canadian Council of Chief Executives

“Ready to Retire? is a most interesting and helpful study of the new realities faced by those like myself who are now contemplating retirement and reinvention”. — The Hon. Roy McMurtry, O.C. O.Ont QC LSM, Former Chief Justice of Ontario

LYNDSAY GREEN is a pioneering sociologist who spent her career helping people use communications technologies for learning, working with groups as diverse as the World Bank, the National Film Board and the Inuit of Canada. She has turned her research skills and knowledge of new technologies to finding out what boomers should be doing to ensure they have a successful old age. The American textbook Computers and Information Systems calls Ms. Green an “information agent of the future.” Peter Mansbridge interviewed Lyndsay for his CBC show One on One and had this to say about You Could Live a Long Time: "It's full of advice, really good advice, that you'll be grateful you took when you hit those golden-plus years."

Other Works by Lyndsay Green