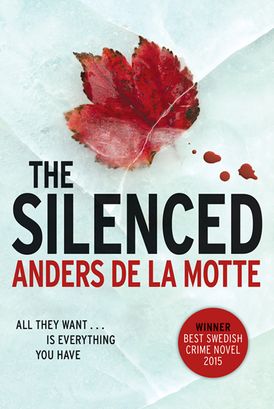 When a badly mutilated body is found in the waters of a large government-owned estate just outside of Stockholm, Detective Julia Gabrielsson is put on the case. Who is the deceased? And why has someone gone to such lengths to prevent the body from being identified?

Officer David Sarac is a man haunted by demons. After a violent showdown that almost cost him his life, Sarac is being treated in a mental facility far from the capital. Recently, he’s been saving the sleeping pills given him by his keepers. He plans to take them all at once—twenty-five in total—to permanently silence the accusing voices in his head. That is, until a mysterious offer forces Sarac to reconsider his fate.

The Silenced is an adrenaline-charged thriller, set in a ruthless world where nothing is what it seems and anything goes in the desperate fight for power. It is the second stand-alone volume in de la Motte’s internationally bestselling series that began with MemoRandom.

“The pulse and suspense are both at a peak.” — Östgöta Korrespondenten (Sweden)

“Anders de la Motte has herein crafted a modern, Swedish thriller of international class, with an ethical social pathos and filmic qualities. A bit like the books of Arne Dahl and the movies about Jason Bourne all in one package.” — BTJ (Sweden)

“With the breakneck pace of the [Game] trilogy but a more mature narrative command, de la Motte deftly spins out these divergent strands, until the intricate outlines of a deadly spider’s web finally becomes visible-and inescapable.” — Publishers Weekly (starred review)

“Following up his popular Game Trilogy, de la Motte keeps the reader guessing in this tale of an amnesiac cop and an informant whose very existence we sometimes doubt.” — Kirkus Reviews

“An action-filled thriller that makes good use of an unreliable narrator-in this case, a man desperate to root out his own misdeeds. An intriguing premise and a compelling lead character.” — Booklist