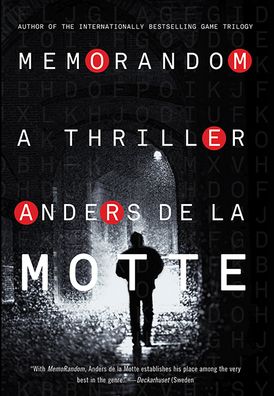 David Sarac wakes up behind the wheel of a car after suffering a momentary stress-induced stroke. He crashes violently inside a tunnel, and awakens to find his whole world changed. David works in intelligence for the Stockholm police, recruiting and handling secret informants who help the police in the battle against organized crime. And David is very good at what he does: manipulation, bribes and threats—anything goes, as long as he delivers. Other law-enforcement agents look on with envy from the sidelines, sharing whispers and rumours about the top-secret, high level informant named Janus who is the key to David's success.

But after the accident, David remembers nothing about the past two years. Not even Janus, the man everyone wants to find—from Atif Kassab, a former hit man who’s just returned to Sweden to live the straight life, to Jesper Stenberg, a politically ambitious attorney with a fatally compromising personal secret, to Natalie, a medical student-turned-conwoman. David knows he has to re-establish contact with Janus in order to protect himself and his network of secret informants. Luckily, he is surrounded by friends and colleagues who are more than happy to help him remember. Or maybe forget?

Anders de la Motte brings his signature contemporary energy to a kaleidoscopic modern noir story that braids together the criminal underworld, law enforcement and high-level politics—and shows us how deeply and irreversibly those worlds are intertwined, and that anyone can be corrupted—for a price.

“With MemoRandom Anders de la Motte establishes his place among the very best in the genre.” —DECKARHUSET (SWEDEN)

“High quality all the way. . . . A raw, bloody, effectively told story about organized crime, police officers with double agendas, and corruption on high levels in the political sphere.” —AFTONBLADET (SWEDEN)

“With the breakneck pace of the [Game] trilogy but a more mature narrative command, de la Motte deftly spins out these divergent strands, until the intricate outlines of a deadly spider’s web finally becomes visible-and inescapable.” - Publishers Weekly (starred review)

“Following up his popular Game Trilogy, de la Motte keeps the reader guessing in this tale of an amnesiac cop and an informant whose very existence we sometimes doubt.” - Kirkus Reviews

“An action-filled thriller that makes good use of an unreliable narrator-in this case, a man desperate to root out his own misdeeds. An intriguing premise and a compelling lead character.” - Booklist

“A hard-hitting, fast-paced psychological thriller. . .From page one through the very end, readers are breathlessly awaiting the next twist. . .” - RT Book Reviews

“Readers will devour the intricacies of this thrilling crime novel and will hurriedly turn the pages until its denouement. For teen fans of Stieg Larsson’s Millennium series and de la Motte’s Game Trilogy.” - School Library Journal

“Anders de la Motte establishes his place among the very best in the genre.” - Deckarhuset (Sweden)

“High quality all the way. . . . A raw, bloody, effectively told story about organized crime, police officers with double agendas, and corruption on high levels in the political sphere.” - Aftonbladet (Sweden)

“This is an incredibly thrilling novel. It is fast paced and I find myself reading faster and faster. It is a novel that will make the night shorter, because when you believe the clock to be one o’clock it is actually five in the morning.” - P4 Halland (Sweden)

“A taut thriller that will leave the reader excited for the next book in the series.” - Kirkus Reviews

“Maintains a high suspense from the first page to the last, as David Sarac tries to piece his memory fractions together again.” - Olandsbladet (Sweden)

“A perfect edge of your seat thriller.” - Booky Ramblings

“Cements de la Motte’s reputation as a master of thrills. Readers unfamiliar with the author are sure to track down his previously lauded Game trilogy.” - Killer Nashville

“You simply have to read this excellent novel which is absolutely jam packed with exciting twists and turns...My verdict--highly recommended--a must.” - Crime wrap

“If you’re a thriller fan who’s into heart-racing reads, you’re going to want to check this one out.” - Popcorn Reads