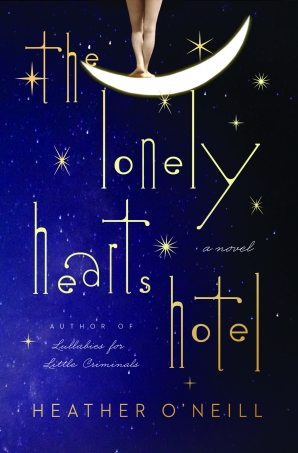 Set in Montreal and New York between the wars, a spellbinding story about two orphans whose unusual magnetism and talent allow them to imagine a sensational future, from the bestselling, two-time Scotiabank Giller Prize-shortlisted author.

Exquisitely imagined and hypnotically told, The Lonely Hearts Hotel is a love story with the power of legend. Set in the early part of the 20th Century, it is an unparalleled tale of charismatic pianos, invisible dance partners, radicalized chorus girls, drug-addicted musicians, brooding clowns, and an underworld whose fortune hinges on the price of a kiss. In a landscape like this, it takes great creative gifts to escape one's origins. It might also take true love.

Separated as teenagers, both escape into the city's underworld, where they must use their uncommon gifts to survive without each other. Ruthless and unforgiving, Montreal in the 1930's is no place for song and dance. But when Rose and Pierrot finally reunite beneath the snowflakes, the possibilities of their childhood dreams are renewed, and they'll go to extreme lengths to make those dream come true. After Rose, Pierrot and their troupe of clowns and chorus girls hit the stage and the alleys, the underworld will never look the same.

With extraordinary storytelling, musical language, and an extravagantly realized world, acclaimed author Heather O'Neill enchants us with her best novel yet — one so magical there is no escaping its spell.