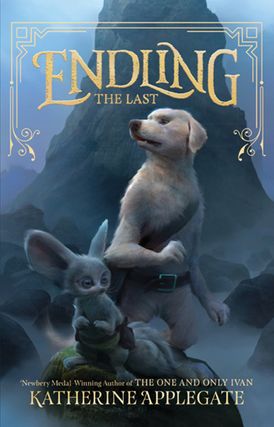 I REMEMBERED with a sudden pang, my mother’s words the last time we were together: It’s never wrong to hope, Byx.

Of course, she’d also said: Unless the truth says otherwise.

Byx is used to being the youngest and the smallest. But for all her life, she’s also been part of something bigger—part of a family, part of a pack. Until the terrible day Byx finds herself alone, the last of the dairnes. The endling.

For dairnes, the pack is everything: root and branch, heart and soul. Byx is determined to see if the legends she’s heard over the years about others of her kind are true. She sets off on a quest, traveling through the war-torn kingdom of Nedarra. Along the way, she meets new allies who each have their own motivation for joining her: Tobble, the worthy wobbyk; Khara, the girl of many disguises; Renzo, the thief with honor; and Gambler, the principled felivet.

They start as Byx’s friends and become her family, and together they uncover a secret that will threaten the existence of not just the dairnes but every other creature in their world.

★“Applegate effortlessly constructs her fantasy world, briskly moving readers through its imaginative details while creating winning, unique characters. This epic series starter is a bracing, propulsive read that will be a challenge to keep on the shelf.”  — ALA Booklist (starred review)

★“Fantasy lovers are in for a treat with this smartly paced, enthralling adventure. The heart and courage Byx and her companions must find as they stand up against unimaginable odds will inspire and delight. A sweeping fantasy epic that will have readers clamoring for a follow-up.”  — School Library Journal (starred review)

★“Applegate skillfully builds a fully realized world of intrigue and wonder without ever letting up on the story’s quick pace. Themes of genocide, conservation, and magic are interwoven, providing thought-provoking questions for astute readers. A savvy choice for readers of fantasy.” — Kirkus Reviews (starred review)

★“Will whet readers’ appetites for more of Byx’s fascinating world and the next stage of her quest.”  — Bulletin of the Center for Children’s Books

★“Animal-loving youngsters and their adults will find plenty of food for thought in Ivan’s extraordinary story.” — Bulletin of the Center for Children’s Books (starred review)

“Readers will fall in love with Byx and race with her through Nedarra, breathless and eager, thinking deeply all the way.” — New York Times Book Review