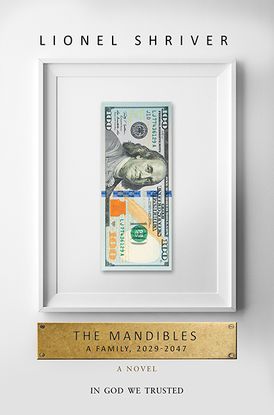 From Lionel Shriver, the acclaimed author of the National Book Award finalist So Much for That and the international bestseller We Need to Talk About Kevin, comes a striking new novel about family, money, and global economic crisis.

The year is 2029, and nothing is as it should be. The very essence of American life, the dollar, is under attack. In a coordinated move by the rest of the world’s governments, the dollar loses all its value. The American President declares that the States will default on all its loans--prices skyrocket, currency becomes essentially worthless, and we watch one family struggle to survive through it all.

The Mandibles can count on their inheritance no longer, and each member must come to terms with this in their own way—from the elegant ex-pat author Nollie, in her middle age, returning to the U.S. from Paris after many years abroad, to her precocious teenage nephew Willing, who is the only one to actually understand the crisis, to the brilliant Georgetown economics professor Lowell, who watches his whole vision of the world disintegrate before his eyes.

As ever, in her new novel, Shriver draws larger than life characters who illuminate this complicated, ever-changing world. One of our sharpest observers of human nature, Shriver challenges us to think long and hard about the society we live in and what, ultimately, we hold most dear.

“Sharp and wryly unpredictable, The Mandibles is also chilling because, set in the very near future, it’s so eminently plausible.” — Toronto Star

“Known for tackling big contemporary issues head-on, Shriver deals skilfully here with the implications of economic meltdown. The novel, set in a near-ish future, tells of the plight of the once wealthy Mandible family and the decline of four generations into penury, thieving and prostitution.” — The Financial Times

“This is a sharp, smart, snarky satire of every conspiracy theory and hot button political issue ever spun; one that, at first glance, might induce an absurdist chuckle, until one realizes that it is based on an all-too-plausible reality.” — Booklist (starred review)

Lionel Shriver's fiction includes The Mandibles; Property; the National Book Award finalist So Much for That; the New York Times bestseller The Post-Birthday World; and the international bestseller We Need to Talk About Kevin, adapted for a 2010 film starring Tilda Swinton. Her journalism has appeared in the Guardian, the New York Times, the Wall Street Journal, and many other publications. She’s a regular columnist for the Spectator in Britain and Harper’s Magazine in the US. She lives in London and Brooklyn, New York.