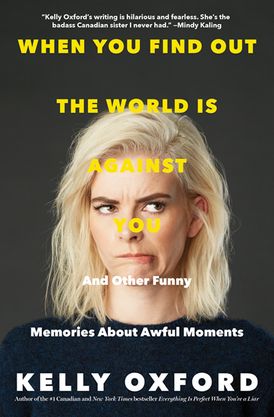 The author of #1 Canadian and New York Times bestseller Everything Is Perfect When You’re a Liar returns with a deeper and even funnier new collection of essays about the pleasures and perils of living in Kelly Oxford’s head.

Kelly Oxford likes to blow up the Internet. Whether it’s with the kind of tweets that led Rolling Stone to name her one of the Funniest People on Twitter, with pictures of her hilariously adorable family (human and animal) or with something much more serious, like creating the hashtag #NotOkay, where millions of women came together to share their stories of sexual assault, Kelly has a unique, razor-sharp perspective on modern life. As a screenwriter, professional sh*t disturber, wife and mother of three, Kelly is about everything but the status quo.

Perfect for anyone who ever wished David Sedaris and Mindy Kaling would just finally write a book together already, When You Find Out the World Is Against You is filled with the biting, wise and laugh-out-loud insights that have won Kelly legions of fans. Whether she’s exploring the bittersweet boredom that so often accompanies parenthood, calling out the insanity of a posse of Internet poodle vigilantes, writing bracingly about the anxiety that has plagued her for as long as she can remember or taking us to ride shotgun as she stalks her husband on an accidental date with another man, When You Find Out the World Is Against You is Kelly at her best. Called “our present-day, funny Joan Didion” by filmmaker Gia Coppola, Kelly’s comedic skill, down-to-earth voice and bull’s-eye observations on the absurdity of modern life mean there is nothing quite like seeing the world through her eyes.

“Kelly Oxford is one of the funniest writers I have read in a long time.” - Jason Segel

“Oxford’s new book, When You Find Out the World is Against You, is an extension of her social media brand (clever, insightful, self-deprecating). . . . She once again bares it all in a series of nostalgia-inducing personal essays, some LOL funny. . .and others poignant.” - Fashion

“Kelly Oxford has this unbelievable ability to tell stories in a way that makes you laugh without ever shoving jokes in your face.” - Justin Halpern, author of Sh*t My Dad Says

“The essays in When You Find Out the World is Against You pack a straight-up emotional punch.” - Chatelaine

“Oxford’s writing is marked with the same wry voice that’s made her a social media sensation.” - Los Angeles Times

“While both books rest on the sarcastic character developed over social media, When You Find Out the World is Against You finds [Oxford] experimenting with sincere introspection.” - The Walrus

““Kelly is part geek, part freak. When You Find Out the World Is Against You shows us ourselves: our sensitivities, our awkward moments, our strange desires. She takes us through summer camp, dating, rape culture, Trump, death. . . . Kelly Oxford c’est moi.” - James Franco

“One of the funniest voices ever to hit the Internet.” - NPR

“Two things I’m grateful for: how imperfect Kelly Oxford is at life and decision-making, and how terrific she is at writing about what a goddamn mess she is.” - Patton Oswalt

“With her signature wit…[Oxford] delves into the ups and downs of this thing we call life.” - Cosmopolitan

“[One of] the funniest people on Twitter.” - Rolling Stone

“[Oxford’s] 12 essays—about growing up, marriage and parenting, etc. etc.—are clever and unfailingly amusing. The girl can turn a phrase.” - The Star

“When You Find Out the World is Against You is Kelly at her honest and most disarmingly funny best. Filled with biting, wise, and laugh-out-loud insights, this vastly entertaining collection of vignettes will make you think as much as it will make you laugh.” - 49th Shelf

“Kelly Oxford is a beautiful writer. She finds beauty in the mundane and humor in everyday eccentricities. She is our present-day, funny Joan Didion.” - Gia Coppola

“Oxford has a gift for snarky one-liners and self-effacing humor.” - Kirkus Reviews

“Kelly Oxford is the friend we all deserve-the one who tells us the best secrets, takes us on all the finest adventures, and remembers every hilariously embarrassing detail. Everything Is Perfect is sharply funny, and truly great.” - Cameron Crowe

“Kelly Oxford is like your cool babysitter who teaches you about sex and sarcasm in an un-creepy way. Hanging out with her book makes you wish your parents were always out to dinner.” - Lena Dunham

Other Works by Kelly Oxford