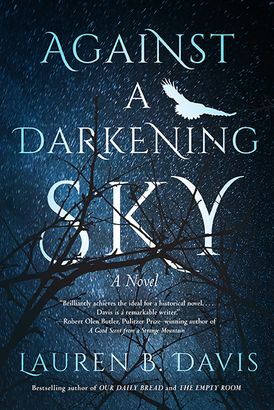 From the author of the acclaimed Our Daily Bread and The Empty Room comes a rich and fascinating new novel of mysterious, magic-riddled seventh-century England: Against A Darkening Sky transports the reader to a rich yet violent past where a young woman is torn between her deepest beliefs and her desire to belong in a changing world.

Wilona, the lone survivor of a plague that has wiped out her people, makes her way across the moors to a new life in the village of Ad Gefrin, where she is apprenticed to Touilt, a revered healer and seeress. She blossoms under Touilt’s tutelage and will one day take her place, but as an outsider, she is viewed with suspicion by all except Margawn, a warrior in the lord’s hall. When the king proclaims a conversion to the new Christian religion, Ad Gefrin becomes a dangerous place for Wilona and Touilt. Their very lives are at risk as the villagers embrace the new faith and turn against the old ways, even as Wilona’s relationship with Margawn grows. Wilona’s fate becomes intertwined with that of Egan, a monk sent to Ad Gefrin as part of the Christian mission; both will see their faith and their loyalties tested.

Torn between her deepest beliefs and a desire to belong in a confusing, changing world, Wilona must battle for survival, dignity and love against overwhelming odds. Seamlessly combining timeless choices and struggles and rich, nuanced historical detail that brings pagan Britain to life, Against a Darkening Sky is an exquisitely rendered work of fiction from one of Canada’s most acclaimed and celebrated novelists.

“Davis is without a doubt an exceptionally talented writer.” —THE GLOBE AND MAIL

“Richly layered.... Not just a compelling story, but a treatise on the idea of fighting back when one’s beliefs are challenged. The way one’s ideals survive in an ever-changing world, as imperative now as it was thousands of years ago, is at the crux of this expertly rendered parable.” — The Globe and Mail

“Against A Darkening Sky pulls you in from start to finish.” — Shelagh Rogers, CBC's The Next Chapter

“Rich and well-realized....Though it wrestles with big questions surrounding how we construct a view of reality, it’s the human connection and the deep intimacy there that gives this novel its magic.” — This Magazine

“Never a false note is struck in Davis’s detailing of Anglo-Saxon life…. Lauren B. Davis is too good a novelist to make her story simply a vehicle for a ‘message’…. Captivating and entertaining.” — Winnipeg Free Press

“Davis brings ancient Northumbria to life…. The story’s theme-how to remain true to one’s beliefs when they pose a threat to belonging, and even survival-still resonates today.” — Quill & Quire (starred review)

“A beautifully written novel that brings the world of the past alive with stunning imagery.... Anyone would be hard-pressed to find another novel that is able to bring the story to life in such striking detail.” — Minneapolis Books Examiner