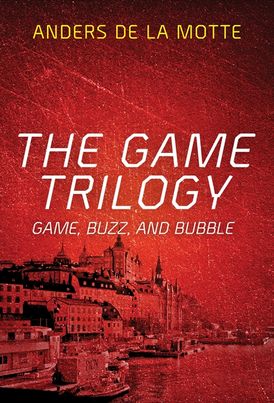 The groundbreaking thriller trilogy taking the world by storm: a deadly game that blurs the line between reality and fiction.

Join Henrik “HP” Petterson in the thrilling world of the Game! This special bundle includes all three books in Anders de la Motte’s Game Trilogy: Game, Buzz, and Bubble. In Game, Henrik “HP” Petterson, a slacker with a big ego and no impulse control, finds a cellphone that invites him to play a mysterious, high-stakes game. HP loves the thrill, but it soon becomes clear there is something more sinister at play. In Buzz, HP is newly wealthy due to his success at the Game, but he misses the excitement. When he meets the beautiful and enigmatic Anna Argos, she throws HP’s life into chaos, pitting him against a threat whose existence he cannot prove. In Bubble, HP is living off the grid, hiding from both the police and the makers of the Game. With everything at stake, HP resolves to complete one final mission in order to expose the Game and finally uncover the truth behind it.

Praise for The Game trilogy:

“A taut thriller that will leave the reader excited for the next book in the series.” —Kirkus Reviews

“Brilliant and fast-paced…. Destined to be an international success.” —Chi (Italy)

“Having read Game, you will put aside Mankell and Larsson.” —Polska Dziennik Lódzki (Poland)

“A trilogy you shouldn’t miss…. Escalates to a breakneck level.” —Dagens Nyheter (Sweden)

“Once you've picked up this breathtaking novel you won't be able to put it down…. Incredibly fascinating reading.” —AGM Magazin (Germany)

“One of the best insights into the vernacular and thinking of the computer generation that we have seen in print... A fast-paced, suspenseful and fun story.” —Fréttabladid (Iceland)

“Keeps you enthralled until the very last page.” —Politiken (Denmark)