A Season In Time

Super Mario, Killer, St. Patrick, the Great One, and the Unforgettable 1992-93 NHL Season 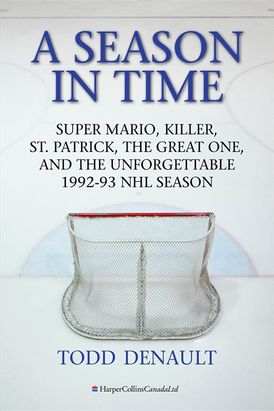 A Season In Time

Super Mario, Killer, St. Patrick, the Great One, and the Unforgettable 1992-93 NHL Season

Twenty years after the fact, the mere mention of the 1992-93 NHL season brings back vivid memories for hockey fans across North America. The last time that the Montreal Canadiens hoisted the Stanley Cup, Wayne Gretzky's last appearance in a playoff final, and Mario Lemieux's most inspirational season; these events mark 1992 and 1993 as some of the greatest years in NHL history. Now, in A Season in Time: Super Mario, Killer, St. Patrick, the Great One, and the Unforgettable 1992-93 NHL Season, acclaimed hockey writer Todd Denault looks back to those heady days that came to be known as "the last great season," A Season in Time is a true trip down memory lane, covering the stories of Mario Lemieux, Wayne Gretzky, Patrick Roy, and Doug Gilmour, and capturing the frenzy and excitement that hasn't been seen since. A Season in Time is essential reading for hockey lovers of all ages.

Todd Denault is a freelance writer whose work has been featured in numerous online and print publications. He is a member of the Society for International Hockey Research, and the author of two books, Jacques Plante: The Man Who Changed the Face of Hockey, and The Greatest Game: The Montreal Canadiens, the Red Army, and the Night That Saved Hockey.

Other Works by Todd Denault