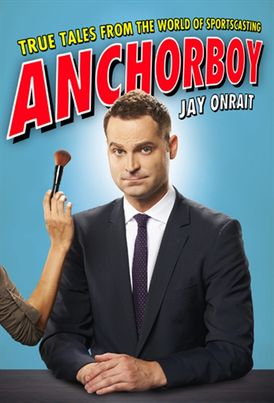 TOP TEN THINGS YOU’LL LEARN WHEN YOU READ THIS BOOK:

9) Interviewing Will Ferrell can be a harrowing experience

All this and more awaits you inside ANCHORBOY!

“Of all the Canadians I have worked with in Hollywood, Jay Onrait is definitely one of them.” — Martin Short

“Jay Onrait has finally found a medium in which he stands a chance to succeed. Stick with the books, kid! Television is just not your thing. And get rid of the other guy immediately.” — Regis Philbin

“I’m not going to be one of those people who says something mean about Jay Onrait just for a cheap laugh and a chance to get on his book cover. Besides, who the hell is Jay Onrait?” — Peter Mansbridge

“When I first met Jay Onrait, he was essentially an intern at TSN. I would berate him daily and make him do silly dog tricks to humiliate him in front of the staff. But if that is in this book, I will sue his ass.” — James Duthie

“Jay is in desperate of need of paycheck, so he wrote another book. Please take him back Canada.” — Andy Roddick

“Seriously, a book by Jay Onrait is not to be taken seriously. Except by Jay Onrait, who was driven by the need to work on his spelling.” — Dave Hodge

“I fell in love with Jay Onrait the day I flashed him on National Television. It was more exciting for me than him, but we both were willing to do anything for ratings. . . Anything. RIP Jay. I will miss your packed lunches.” — Charissa Thompson

Jay Onrait is a Canadian television personality, author, and sports anchor. Born in Calgary and raised in Athabasca, Alberta, Jay’s big break came when he landed a job co-hosting TSN’s SportsCentre alongside Dan O'Toole. In 2013, Jay and Dan joined the launch of the new Fox Sports 1 network as hosts of their flagship show, Fox Sports Live. Somewhere along the way, Jay found time to write two bestselling memoirs, Anchorboy and Number Two, and co-create the wildly successful Jay and Dan Podcast. Jay lives with his wife and daughter in Los Angeles.

Other Works by Jay Onrait