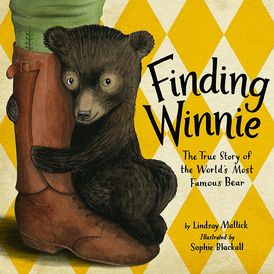 During World War I, Captain Harry Colebourn, a Canadian veterinarian on his way to serve with cavalry units in Europe, rescued a bear cub in White River, Ontario. He named the bear Winnie, after his hometown of Winnipeg, and he took the bear to war.

Harry Colebourn's real-life great-granddaughter Lindsay Mattick recounts their incredible journey, from a northern Canadian town to a convoy across the ocean to an army base in England . . . and finally to the London Zoo, where Winnie made a new friend: a boy named Christopher Robin.

Gentle yet haunting illustrations by acclaimed illustrator Sophie Blackall bring the wartime era to life, and are complemented by photographs and ephemera from the Colebourn family archives.

LINDSAY MATTICK is the great-granddaughter of Captain Harry Colebourn. She has been sharing Winnie’s story through radio, film, book and museum exhibitions. She lives with her family in Toronto.

JOSH GREENHUT is a writer and researcher. He is the author of more than fifteen children’s books, including some in the Flat Stanley’s Worldwide Adventures series. He lives with his family in Toronto.

SOPHIE BLACKALL is a bestselling, Caldecott Medal–winning artist whose books include Finding Winnie and Hello, Lighthouse. She lives with her family in Brooklyn.

Other Works by Lindsay Mattick

Sophie Blackall is the illustrator of many acclaimed picture books, including Finding Winnie, for which she received the Caldecott Medal, one of the most prestigious children’s book awards in the world. Her artwork has also appeared in murals as part of the New York City MTA’s “Arts for Transit” program. She lives in Brooklyn, New York.

Other Works by Sophie Blackall