Book One of the Southern Reach Trilogy 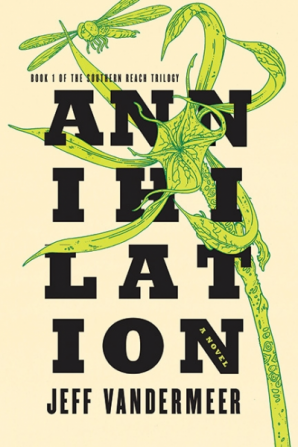 Book One of the Southern Reach Trilogy

Area X has been cut off from the rest of the continent for decades. Nature has reclaimed the last vestiges of human civilization, and the government is involved in sending secret missions to explore Area X. The first expedition returned with reports of a pristine, Edenic landscape; all the members of the second expedition committed suicide; the third expedition died in a hail of gunfire as its members turned on one another; the members of the eleventh expedition returned as shadows of their former selves, and within months of their return, all had died of aggressive cancer.

Annihilation opens with the twelfth expedition. The group is composed of four women, including our narrator, a biologist. Their mission is to map the terrain and collect specimens; to record all of their observations, scientific and otherwise; and, above all, to avoid succumbing to the unpredictable effects of Area X itself.

What they discover shocks them: first, a massive topographic anomaly that does not appear on any map; and second, life forms beyond anything they're equipped to understand. But it's the surprises that came across the border with them that change everything—the secrets of the expedition members themselves, including our narrator. What do they really know about Area X—and each other?

“The real strength of [Annihilation] is its genuine weirdness. . . . Once you start this book you will not be able to stop.” — The Globe and Mail

“A gripping fantasy thriller, Annihilation is thoroughly suspenseful. In a manner similar to H. G. Wells’ in The Island of Dr. Moreau (1896), VanderMeer weaves together an otherworldly tale of the supernatural and the half-human. Delightfully, this page-turner is the first in a trilogy.” — Booklist (starred review)

“It’s been a long time since a book filled me with this kind of palpable, wondrous disquiet, a feeling that started on the first page and that I’m not sure I’ve yet shaken.” — Matt Bell, author of In the House upon the Dirt between the Lake and the Woods

“A tense and chilling psychological thriller about an unraveling expedition and the strangeness within us. A little Kubrick, a lot Lovecraft, the novel builds with an unbearable tension and a claustrophobic dread that linger long afterward. I loved it.” — Lauren Beukes, author of The Shining Girls

“In much of Jeff VanderMeer’s work, a kind of radiance lies beating beneath the surface of the words. Here in Annihilation, it shines through with warm blazing incandescence. This is one of a grand writer’s finest and most dazzling books.” — Peter Straub, author of Lost Boy, Lost Girl

“A dazzling book . . . haunted and haunting.” — Kelly Link, author of Magic for Beginners

“The great thing about Annihilation is the strange, elusive, and paranoid world that it creates . . . I can’t wait for the next one.” — Brian Evenson, author of Last Days

“This swift surreal suspense novel reads as if Verne or Wellsian adventurers exploring a mysterious island had warped through into a Kafkaesque nightmare world. The reader will want to stay trapped with the Biologist to find the answers to Area X’s mysteries.” — Kim Stanley Robinson, author of the Mars trilogy.

“After their high-risk expedition disintegrates, it’s every scientist for herself in this wonderfully creepy blend of horror and science fiction . . . Speculative fiction at its most transfixing.” — Kirkus Reviews (starred review)

“This trilogy is a modern mycological masterpiece … Remarkable … Tense, eerie and unsettling … VanderMeer writes much better prose than Poe ever did … This is genuinely potent and dream-haunting writing. VanderMeer has arrived.” — The Guardian

“A teeming science fiction that draws on Conrad and Lovecraft alike … “Annihilation” shows signs of being the novel that will allow VanderMeer to break through to a new and larger audience.” — The Guardian

“VanderMeer’s novel is a psycho-geographical tour de force, channelling Ballard and Lovecraft to instil the reader with a deep, delicious unease.” — Financial Times

“What a haunting book this is, lodging deep in the memory in similar fashion to otherworldly classics such as David Lindsay’s “A Voyage To Arcturus” … “Annihilation” is so disquietingly strange as to defy summarisation. Read it.” — Daily Mail (London)

JEFF VANDERMEER is an award-winning novelist and editor, most recently the author of the critically acclaimed Borne and the New York Times–bestselling Southern Reach trilogy. VanderMeer is also the co-editor, with his wife, Ann VanderMeer, of The Big Book of Science Fiction. He grew up in the Fiji Islands and now lives in Tallahassee, Florida.

Other Works by Jeff VanderMeer