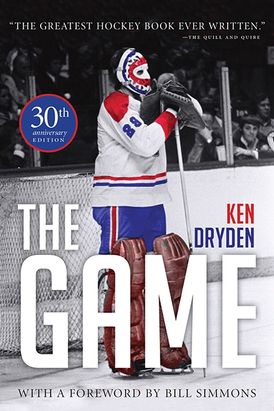 From his humble beginnings playing hockey with his brother in the backyard rink his dad built, Ken Dryden quickly became one of the greatest NHL goalies, winning six Stanley Cups for the Montreal Canadiens during a legendary period in that franchise’s history.

Widely acknowledged as the best hockey book ever written, The Game is a rare and revealing day-by-day account of a week in one NHL goalie’s life, during his very last season playing professional hockey. Ken Dryden gives us special access to a world few have witnessed firsthand. Taking us into the Canadiens’ dressing room, Dryden lets us experience the crackle of nerves before a game and laugh at the practical jokes teammates play on one another. We’re with Dryden on and off the ice, we meet the icons who were his hockey family—Guy Lafleur, Larry Robinson, Guy Lapointe, Jean Béliveau, Serge Savard, and coach Scotty Bowman—and we even keep them company on the road. Thirty years later, the immediacy of The Game makes it feel as true and fresh as when it was first published, and Dryden’s insights about Canada’s favorite sport, the thrills and inconveniences of celebrity, the role of violence in the NHL, and the pleasures and challenges of teamwork still resonate today.

For this updated commemorative edition, Dryden has added a moving new chapter about his day with the Stanley Cup—a privilege that players on winning teams have enjoyed only since 1995. As Dryden travels from a small Manitoba town full of passionate hockey fans to the backyard rink of his childhood, the Cup brings Dryden’s friends, family, and former teammates together for a long-overdue celebration.

And still the game goes on.

Ken Dryden is a member of the Hockey Hall of Fame and the Canadian Sports Hall of Fame and is widely recognized as one of the greatest goaltenders of all time. During Dryden’s eight seasons in goal, the Montreal Canadiens won the Stanley Cup six times, and Dryden won the Conn Smythe Trophy, Calder Cup and Vezina trophy six times. A graduate of Cornell University and, in law, McGill University, he is the author of three other books, Home Game, The Moved and the Shaken and In School. Ken served as a member of parliament, including as a cabinet minister, and was recently inducted into the Order of Canada. He lives in Toronto.

Other Works by Ken Dryden