...And Other Off-the-Wall Stories About Sports...and Life 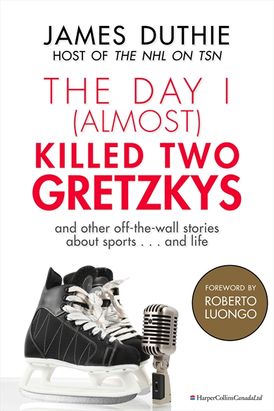 ...And Other Off-the-Wall Stories About Sports...and Life

Although James Duthie’s daughter had hoped he would write a book featuring princesses, dragons or zebras, you won’t miss them in The Day I (Almost) Killed Two Gretzkys. Instead Duthie interviews a prophet monkey who predicts games’ outcomes, confesses to the near-homicide of both Walter and Wayne Gretzky, and provides plenty of evidence of his unhealthy obsession with Anna Kournikova. He weighs in on famous athletes like Sidney Crosby, Tiger Woods, Tom Brady and Derek Jeter, and tells his misadventures as a sportscaster, fan, father, husband and son.

“I was lucky to survive the day Duthie played in my golf tournament. Little did I know he’d turn that experience into one of the best books on sports that I’ve read in a long time.” — --Wayne Gretzky